Changing Earth Creationists are unlike Young Earth or Old Earth Creationists. YEC and OEC interpret creation with western science and western tensed verbs.  No biblical prophet could have intended such interpretations. Western science  only matured over the last 400 years. When Moses wrote of creation, the concept of time had not yet been invented.

Understanding creation literally requires that one accept it as an ancient person would, using their grammar and world view. The more you are educated in western science, the more difficult it is to interpret earth history like our ancestors did.  Why is this? All ancient people assumed that everything changes. The Bible plainly states that the creation is enslaved to change (Romans 8:21-22).

Changing Earth Creationists (CEC) accept that everything changes. We confirm this visibly, since we observe with telescopes that  every physical thing in the universe continues to change. 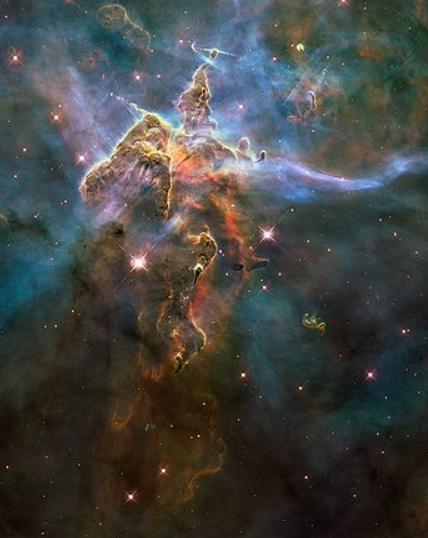 The Carina Nebula has pillars of dust emerging from a huge cloud. (The dust pillars have a star at their tips). At the top is the star Herbig Haro-901 shining from the end of a dust column. Two knotted jets emerge from this star with bow shocks at their ends. (HH-902 is spewing a knotted, double stream of gas below and to the left of HH-901). We see stars ejecting streams of dust that are clearly forming the dusty nebula. As the stars spread out, they form pillars of dust around the edges of the nebula. What is visible supports a literal biblical creation and Earth history.

What does it mean, everything changes? The ancients believed that the first generations lived long enough to observe geological changes in few days, as Job described in chapter 14. Job used the dried Mediterranean sea (Hebrew word west) as one of his markers for the few days of life. Indeed, drill cores show that the Mediterranean dried repeatedly. If we lived long enough to observe the Mediterranean dry, we would grow large brain boxes with thick brow ridges, like a Neanderthal. This is because our skulls are the only part of our skeleton that keeps growing as we age. Indeed, Job mentioned how their faced changed, doubled, before they died. We find the skulls of our early ancestors with thick brows, as though they lived for geological eons. Yet Neanderthal children had modern skull shapes. Some of them have tooth striations and worn enamel on baby teeth as though they were eons old, yet still infants.

The key to a proper understanding of earth history  is to accept that matter changes itself relationally as it ages. Relational changes are where every aspect of reality changes together, that is in parallel. We confirm relational changes in all matter because no ancient galaxy shone with the light frequencies of modern atoms, and the differences increase with distance.

What is visible in cosmic history only fits the grammatically words of biblical creation.