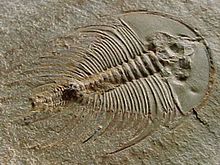 The Hebrew creation account uses five times as many continuing action as completed action verbs. Imperfect verbs and participles show actions that are incomplete or continuing. They may be rendered in English with words like continued, proceeded, kept on. When the creation text uses verbs of this type, it often shows God commanding actions conducted by things He continued to form on previous days. Neither the grammar nor the described events support the traditional Latinized short duration single commands and actions.

In Job 38:4-6, God ask Job if he understands how He laid the foundations of the world. In the Hebrew text of day one, the Earth was dark and empty (formless) until God continued to command light to be. Evidently he was continuing to  energize matter with light, thus giving it extension.

Job 38:8-9 describes the birth of the sea. “Who continued to close (sakak – to cover over) the sea behind doors (deleth – something swinging – a gate – a lid) when it was gushing and continuing to emerge from the womb. When I was making the clouds its garment and dense clouds its swaddling band.”

God uses the metaphor of a birth, the the sea (singular noun) emerging from the womb. When the sea emerged, it was swaddled in thick clouds. The seas (plural) were gathered into one place, evidently underground, on day three. The surface waters evidently percolated underground, which allowed the dry land to appear. This fits the metaphor of the sea being enclosed by a lid.

On day two, God continued to command a spread out (raqiya) atmosphere to continue to separate the waters above from surface waters. The waters above the atmosphere were solid, evidently in the form of ice (Proverbs 8:27-28).

Also on day three, God continued to command the ground to sprout plants. Some of the plants grew into trees that produced fruit and reproduced themselves in a single afternoon, before the Sun began to form. These are not evidence for one time commands or creations.

On day four, God kept on forming the Sun, Moon and stars and continued to make them into things that spread out (raqiya). The evidence for day four is overwhelming since we can see, with telescopes, cosmic history at many ranges. We observe how stars continuing to form, emerge and spread out, evidently from the unformed matter God created first. Billions of galaxies continued to grow from tiny globs into huge, growth spirals as the stars continued to form and spread out. The stars’ volume and their orbits are both observed to spread out.

Why don’t our translators mention the continuing processes as God continues to command inanimate substances to act? Modern Bibles follow the Latin Vulgate traditions, when it comes to creation. The Vulgate renders God’s commands for day five with dixit, his creation of the sea creatures with creavitque and his blessing with benedixitque. These are Latin perfect verbs as though God speaks, creates and blesses with one-time commands.

This is not abiogenesis: organisms spontaneous forming from lifeless matter. At God’s continuing commands, lifeless matter continues to produce creatures that continue to move and reproduce themselves. We find only one perfect verb on day five. The waters swarmed (multiplied) with moving creatures, which is not a word for a finished action. It shows continuing reproduction until the waters and the air were filled with creatures that reproduced after their kinds.

How long did this reproduction last? It began on a single day, day five. Apparently, by the end of day five, the subterranean seas and the spreading atmosphere were swarming with moving creatures that multiplied after their kinds. All animals are still obeying the Divine imperatives to be fruitful, to multiply and to fill the earth by continued multiplication.

Modern people are trained to think with western assumptions that are radically different from the thinking of all people in Moses’ era. The ancients had a non linear view of earth history: that their ancestors lived for eons but days and years continued to degenerate for succeeding generations. Job who lived in the dinosaur age, described the various geological markers that passed in few days, during his lifetime. One of his markers for the duration of life was: the the sea dried. The Hebrew word for sea was west, the direction 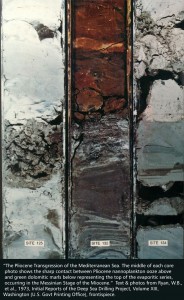 of the Mediterranean  from Job’s home near the Jordan river. Indeed, drill cores show that the Mediterranean dried eight times leaving layers of salt and gypsum sandwiched between deep sea oozes. The photo on the right shows the transitions between deep sea oozes and evaporites, such as carbonate dolomite. The photograph is from Ryan, W.B. et al, 1976, and came from the NOAA web site. Click on the image to see the full size. Scientists estimate that the last time the Mediterranean dried was 5 million years ago. Job lived about 4000 years ago,according to biblical genealogies.

Job also said their faces doubled (shana paniym) before they died. The bones of our skull are the only part of our skeleton that keeps

growing as we age. If we lived for geological ages, our faces would grow Neanderthal brows. This is a Neanderthal skull of an old man from Gibraltar. This old man had extended brows because, like Job, he lived to observe geological changes in his lifetime. Neanderthal child skulls look like our skulls, not like their grandparents. The picture is licensed under Creative Commons Attribution Share Alike by AquilaGib from wikipedia.

If you interpret creation in the ancient system, as a contemporary of Moses would, the age of the universe is not a problem. The Bible consistently calls the Old Testament era: olam, the ancient era, translated as eons in Greek.  The gospel was hidden for long ages (Romans 16:25) . The Scriptures were written for us, upon whom the close of a series of eons has come (Hebrews 9:26). Peter said the plural heavens came out (ek-palai) – long ago (2 Peter 3:5).  In our era, our opportune moment is short [kairos sustello],of limited duration, contracted, drawn together and abridged since Jesus is coming soon (1 Corinthians 7:29).  If you do not understand what causes days and years to continually accelerate as orbits spiral out, consider the issue of gravity aberration which is explained on this web site. 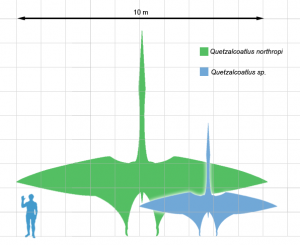 The picture from wikipedia shows the wingspan of giant pterosaurs. Their wingspan was as large as that of a fighter jet. Scientists cannot understand how such huge creatures could fly because their system of reasoning was founded on a basic assumption, that matter and orbits are NOT continually changing, changing together, relationally. The drawing is from Matt Martyniuk, Mark Witton and Darren Naish and is licensed under a Creative Commons Attribution 3.0 Unported license. God created the tannin – the great sea monsters and the flyers that fly in the spread out atmosphere (raqiya shamayim) on day five.

At the head of this article is of a fossil of an Olenellus Fowleri. This creature lived on floor of shallow, underground seas long ago. God commanded the waters to swarm with such creatures on day five. The picture is under the GNU free documentation license from wikipedia.