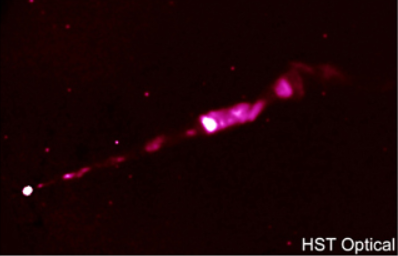 M87 is a gigantic elliptical with a jet, longer than the radius of the galaxy, emerging from a central, point-source. Image credit NASA and Perlman (UMBC), et al., STScI

Our own galaxy is surrounded by ejected gamma, radio or X-ray lobes of about the same diameter, but perpendicular, to  the spiral arms. The spiral arms rotate around (and center on) the galactic core. Many quasars gush out pulsed chains in bi-directional streams. Early galaxies are often surrounded by strings of equally spaced star globs, like beads on a necklace.  The star globs have not rotated around as much or spread out as much as the arms in nearby spirals. A river of neutral hydrogen connects the Magellanic galaxies with the Milky Way’s south pole, evidence that these small galaxies were ejected .

SS Cygni is a star that brightens every 7 to 8 weeks and then returns to a dimmer state.  How do astronomers explain these outbursts? They calculate that SS Cygni is really two dwarf stars that orbit each other at about a  third the distance between the earth and Moon. One dwarf stars is supposed to pull gas off its companion until it accumulates enough reactants to produce a two-day outburst. The invisible companion is needed because a single star is not supposed to flare every seven or eight weeks for over a century.

We observe huge bidirectional jets moving out from point sources in quasars and active galactic nuclei. Astronomers claim these are evidence for a black hole that has so much gravity that light cannot escape. Supposedly, as the dust and gas falls into the hole’s dark maw, it shines in X-rays. Allegedly, the invisible holes are spinning which causes some of the infalling matter to jet out along the spin axis. If the jets are emerging from a black hole, why do they move out straight, without bending from the effects of gravity? We never detected matter falling into a point source. We observe the opposite, knots of matter that move outward.

Dusty nebulae are common along the arms of our galaxy. When we peer through the dust with infrared telescopes, we find stars ejecting dust in long, bidirectional, collimated spurts. Yet the scientific story is that gas, for the most part, is falling in, forming new stars as the gas gravitates together. Astronomers even refer to nebulae as star nurseries. Yet we observe the bow shocks at the end of the jets and, over the years, how the knots of matter stream away from the star. Observations of HH34 show an offset of four and a half-years between the emergence of similar knots in opposing jets. This is the nebula star HH47 that is shooting out a double jet complete with bow shocks at both ends. Credit: NASA/ESA/P. Hartigan (Rice University).

What is wrong with stories about the accretion of stars and galaxies from diffuse gas, black holes and dusty star nurseries? The visible evidence from all ranges and all directions shows ejections from point sources into diffuse objects, not things gravitating together.

Scientific explanations never question science’s first principle since it is the historical basis for their mathematical empiricism.

Read about the first principle of physics here:

What we see in cosmic history demonstrates the truth of the literal, Hebrew creation account.

2. At this stage the Earth was formless, although it had a surface (paniym). Then Elohim’s wind dithered with unbroken continuity above the dark, primordial place as He continued to command light to continue to be. Evidently that is when the earth began to have extension as the things God created first (perhaps god particles) received form as light dithered around within matter. Clearly, matter is a relation with light, as anyone with sight can observe.

This is what we observe in the light from all parts of the universe. Hundreds of billions, perhaps trillions, of galaxies grew from tiny naked, globs of unformed matter. How do we know it was unformed matter? It shines at tiny fractions of the frequencies emitted by modern, local atoms. We observe throughout cosmic history how stars continue to accelerate outward, continue to take up more volume, continue to increase their clock rates as billions of galaxies continued to grow into huge, local, growth spirals. A few thousand years ago, our ancestors mentioned close planet passages and the crushing of a nearby planet. The Bible also mentions both of these  things. Te text says He continues to form the Sun, Moon and stars into spreading things (Hebrew raqia).

Why do scientists tell stories about accretion of stars from dust, black holes, invisible matter and stretching vacuums that stretche all light light passing through the voids?  Scientists have an inflexible creed. What creed? The very idea the Bible predicted for the last days, the notion that all things remain the same. See 2 Peter 3:3-6.

The effects of matter continuing to receive form are also observable

locally. The Earth has a global, volcanic expansion seam in every ocean that continues to form new earth crust. The continents only fit together on a tiny globe, without major surface seas.  Subduction is clearly a scientific myth, since the ocean trenches have layered, undisturbed sediments with no sign of scraped off sea mounts or piled up sea oozes as the earth allegedly swallows its crust. The Bible plainly states that the Earth spreads out in unbroken continuity. The picture shows how the Earth has grown as new oceans form, while the older continents stay rooted in place. Image credit Michael Netzer who has released it under the CC 3.0 attribution license . 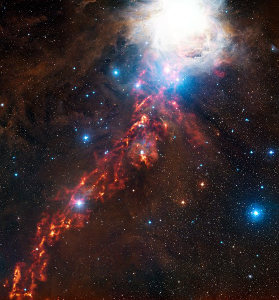 This picture shows a long fiery ribbon emerging from the Orion Nebula. The orange glow is the faint long wave light as imaged by ESO- Atacama Pathfinder (APEX). The long wave image has been superimposed over the visible light view of the Orion Nebula (M42) from DSS-2. Picture credit: ESO and the Digital Sky Survey 2. The emerging stream continues to bifurcate as it distances itself from the bright source at the top of the image. This is evidence that the properties of matter continue to change is matter emerges and spreads out.

Carefully examine the visible history of the universe. Test the first principle of science, the notion that the properties of matter are fixed, not emerging. What you see is the evidence that the Creator will make foolish the greatest system of science ever contrived by philosophical man. What glory the Creator will get when He makes foolish the wise of this age, as He promised.