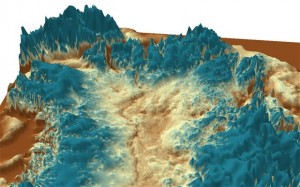 Using ice penetrating radar, Professor Jonathan Bamber from Bristol University, mapped a branching river valley that winds for over 400 miles through Greenland’s central plain. After cutting a deep gorge through the coastal mountains, the ancient river valley runs east to the sea. The valley’s V-shaped walls and flat bottom suggest that it formed by running water, before Greenland was covered with kilometers of ice. Graphic credit J. Bamber, University Bristol. The mountains in the picture are represented by blue and the low lying terrain is brown.  How do inland rivers cut canyons through coastal mountains? A coastal mountain range runs from Alaska to Mexico yet rivers that start in inland plains cut through the mountains to reach the Pacific. Evidently, the rivers gradually incised the valleys as the mountains were simultaneously rising.

How old are the mountains? The Bible teaches two things that, to a western mindset, are incompatible. It associates geological eons with the Old Testament era, which occupied only about 4,000 years. We read of the birth of mountains (Psalm 90:2) that are compared to God’s olam ad olam (eons upon eons) existence. Olam means a vast, out of sight, over the horizon era. The Bible does not mention mountains until 1656 years after creation. The mountains rose as the waters of the cataclysm drained into wide valleys (Psalm 104:6-8). This is evidently a reference to the beginning of the modern oceans. Drill cores show that the land-locked eastern Mediterranean is the oldest ocean. Scientists claim its floor is 270 million years old, older then the Pacific, the Arctic, Indian and Atlantic oceans. According to the Bible, the Earth’s watery division (palag) happened during Peleg’s days, four generations after Noah. How can geological eons (mountains, incised canyons and new seas) fit 6,000 years of biblical history?

The biblical Job lived about 4,000 years ago when dinosaurs still lounged in the Jordan. Job related to the shortness of life to geological events: (1) mountains falling and crumbing, as rocks continue to be moved from their place; (2) water wears down rocks; (3) as water continually washes away the dust of the earth; (4) the sea (Hebrew west) and streams dry. Drill cores confirm that the Mediterranean (west of Job) dried eight times, leaving thick layers of plankton sandwiched between gypsum, salt and stromatolites. In some Mediterranean basins, drill cores find 2,000 meters of rock salt that precipitated when that portion of the Mediterranean was a salt march. A great submarine canyon runs on the sea floor east of Gibraltar, showing how the Mediterranean refilled from the younger Atlantic. According to scientists, the last Mediterranean drying occurred 5 millions years ago. It is unlkiley that Job lived more than 5,000 years ago.

Drill cores along the Nile valley show that it incised a narrow gorge, deeper than the Grand Canyon, as it rushed down into the mostly empty Mediterranean. Scientists estimate the early Nile formed 35 million years ago. After the

Mediterranean refilled for the last time, the Nile canyon filled with silt and formed a delta. Job ended his poem on the brevity of life by claiming their faces changed, doubled, before they died. The skull is the only part of our skeleton that grows as we age. If we lived for eons, our faces would grow huge brain buckets with Neanderthal brows. Neanderthal infants had modern looking skulls, although some had worn enamel on primary teeth, as though they were eons old, yet still infants. The picture of the skull of a Neanderthal old man is from Gibraltar and is under a CC 3.0 License by AquilaGib from wikipedia. When most of the Old Testament was written, the western concept of an actual and linear time had not yet been unimagined.

What causes days and years to continually shorten, as every old person experiences?

Galactic history is the most powerful evidence for a literal biblical creation. If you are unfamiliar with the literal, grammatical, Hebrew creation text, read the seven days of Creation on this web site.