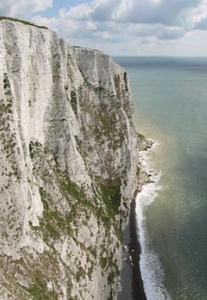 Oceanic basements are 7-kilometer thick, dense basalt that erupts from the earth’s interior. The continental basements are 40-kilometer thick granites that contain large crystals formed during gradual cooling. Radioactive products within crystals show that the oldest rocks are the continental granites. The continents are roughly antipodal to the oceans. (The northern hemisphere has more old continents than the south, which has young oceans). A global volcanic seam continues to extrude fresh basaltic seafloor in every ocean. The youngest seafloor is next to the global crack and the oldest is adjacent to the continents. About 35% of the globe’s surface are continents, if we include the continental shelves. Evidently the geoid was 4(pi)r^2 or about 0.35 of its present surface area, back when the modern oceans began to form. The ancient radius, therefore, was r(0) = (.35 / 4 pi)^½ or ~17% of its present radius: or 1,000 kilometers versus the modern 6,371 kilometers.

The picture of the layered chalk cliffs of Dover is in the public domain from Michael Rowe. The layers in the sedimentary chalk  formed as vast numbers of marine creatures died.

Three times the Bible states that the Earth spreads out, e.g. Psalms 136:6 “To Him who spreads out (in unbroken continuity) the earth above the waters.” The gif of the growing Earth is from Michael Netzer under a CC 3.0 license with attribution.  The continents fit together on a tiny glob before the modern seas began to form.

According to the Hebrew text of Genesis, first God created (completed action) the plural heavens and Earth (the entire universe). However, the early earth was (completion verb) tohu wa bohu, evidently unformed. Then Elohim’s wind dithered in unbroken continuity above the dark, face of the earth and He continued to command light to continue to be (imperfect verbs – Genesis 1:2-3). Indeed, light gives form to matter as it continues to dither around within atoms. Thousands of years later, Zechariah 12:1 claims that God continues, in unbroken continuity, to lay the foundations of the Earth. Perhaps this is why the Earth continues to grow.

Fifty years ago Henry Morris and John Whitcomb publish a monumental work: The Genesis Flood. The book profoundly influenced “creation science” by interpreting geology and marine fossils as evidence for a world-wide flood. The Bible plainly mentions a global flood. Creation scientists cannot accept a growing Earth, even though it is a grammatical reading and the continents only fit together on a minuscule globe without the younger seas. Why not? A growing Earth is unscientific.

Medieval Catholic meta-physicians laid the foundation for western science with their notion that the essence of substance (what it is) is changeless. This assumption is the basis for scientific definitions of matter and time, scientific methods, measuring units and especially scientific earth histories. 2 Peter 3:3-6 predicts that in the last days mockers will come obfuscating the evidence that the plural heavens are “out-old (Greek ek palai)” because they think that “all things remain the same.” They will also reject that the land (ge) emerged from the water, having stood together with it. Later, by the word of God, the then-order was destroyed by the “down-from-washed (kataklysmos).”

According to Genesis, the emergence of the land from the lower waters happened on the first part of day three. In the Hebrew text the land is singular and the seas are plural. Evidently warm, acidic waters seeped underground, etching out underground reservoirs so that the seas were gathered into one place, underground. During Noah’s six hundredth year, the fountains of the great deep (tehom) rent. This is what Peter refers to as the destructive down-washing. Where is the evidence for the underground seas?

The cretaceous contains deposits that were formed during the era when the seas were standing with the land (2 Peter 3:5-6) when the seas were underground. In some areas we find flint (chert) nodules or veins imbedded in thick beds of chalk and limestone. Evidently bits of rock from the roof of the subterranean caverns fell into the beds of marine organisms that were accumulating on the floor of the ancient, shallow, underground seas. Many of the cretaceous formations show evidence of thrusting and folding and are overlain with deposits containing land fossils These evidently  formed when the underground seas collapsed during Noah’s cataclysm. At the end of the cataclysm, wide valleys opened to accept the new surface seas as the mountains also arose Psalm 104:6-9.

Westerners order their earth histories with their linear time ideas. A western person might insist that the cretaceous lasted for 80 million years and this cannot fit the 10 generations from Adam to Noah. We should never interpret the Bible with scientific ideas of time, notions that had not even been invented when Moses wrote. The Bible uses eons words to refer to the early earth and its people, just like other early writers did. Job, who was a descendant of Noah,  used the dried Mediterranean (Hebrew west) as a marker for the length of life during the dinosaur age. Indeed, the Mediterranean dried repeatedly leaving thick deposits of plankton sandwiched between rock salt and anhydrite. Job explains how their face changed (doubled) before they died. The skull is the only part of our skeleton that keeps growing as we age. If we lived for eons, our faces would grow Neanderthal. Neanderthal children had faces like moderns because they had not yet lived the long lives of their grandparents. We sometimes find Neanderthal child skulls with baby teeth whose enamel is worn as though they were very old, yet still infants.

The best evidence for a literal creation is visible with telescopes. Streams of newly formed stars follow each other out in lanes as billions of galaxies grew into huge, growth spirals. The atomic clocks and evidently the inertial properties of matter continue to change as billions of galaxies spread out from their unformed matter state. What is visible does not fit western notions of matter or time. Indeed, what is visible clearly shows that the scientific creed is false, the idea Peter predicted for the last days: that all things remain the same.

How could vast eons coincide with only 6,000 years? Jacob said that his days and years were shorter and worse than the days and years of his fathers (Genesis 47:9). Please notice that he makes no mention of time per se, since in Jacob’s era neither time nor verb tenses had yet been invented. According to the Bible, God passively formed the plural eons out of things unseen, Hebrews 11:3. If you do not understand how gravity, that pulls, can steadily accelerate orbits outward – then read about gravity aberration on this web site.