According to an article in Nature, early human fossils may come from the same specie. The claim is based on skeletons from Dmanisi, Georgia. Dmanisi skeleton #5 had a small brain case, large teeth, a long face and “primitive” upper limbs, which are allegedly similar to H.habilis and Australopithecus. However, many features from the brain case are supposedly unique to H.erectus. The skeletons had well developed humanoid spines and lower limbs. The skulls had the features of several humanoid classifications in a single population. Allegedly these people died about 1.8 million years ago. Image courtesy of M. Ponce de León and Ch. Zollikofer, University of Zurich, Switzerland

The Bible has simple answers to human history that are vastly different from scientific stories. Job chapter 14 describes the geological events that coincided with people’s lives during the dinosaur age. Job claimed the sea (Hebrew west) dried as a marker for the few days of “man who is born of woman.” Drill cores form the deep Mediterranean reveal layers of plankton skeletons alternating with layers of gypsum, stromatolites and rock salt. In some deep basins we find a thousand meters of rock salt: evidence of the once dried sea. According to scientific estimates, the last Mediterranean drying happened 5 million years ago. Biblical Job lived during the patriarchal age, perhaps about 4,000 years ago. 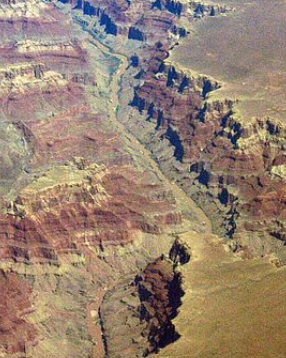 Job listed several other geological markers for the brevity of life. He claimed mountains wear down, water wears away rocks and washes away the dust of the earth. Indeed, the Nile (near Job’s home) was once a narrow canyon cut through a mile of granite as it rushed down into the largely empty Mediterranean. Today the lower Nile meanders through a vast delta of silt that has filled up the once deep canyon. This photo of the Colorado river gorge is under the CC 3.0 license by Workman from wikipedia. 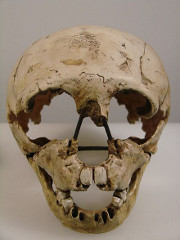 faces doubled (shanah paniym) before they died. Measurements of our skulls show that our brow ridges gradually thicken as we age. If we lived for geological ages, our faces could end up looking like the skulls unearthed at Dmanisi. Neanderthal children, who died in infancy, did not have the brow ridges of their elders. However, some Neanderthal infants had worn enamel on their primary teeth as though they had lived eons, in few years. Thick brow ridges are evidence of living for geological ages. The book of Job contains descriptions of dinosaurs, the dried Mediterranean and other geological markers suggest that he lived in the age that scientists claim happened “millions of years ago.” 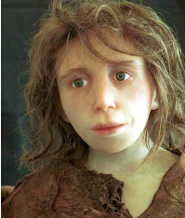 The above picture is of a Neanderthal child skull from Gibraltar. It’s primary teeth have not yet grow. out The photo is from wikipedia and licensed under a CC 3.0 attribution license by Guerin Nicolas. To the right is what this Neanderthal child may have looked like. Notice it does not have the thick brow ridges of an older Neanderthal. The picture is under a CC 3.0 attribution license from John Wetzel, an author at wikipremed.com.

Studies of 390 ancient skulls preserved in a Catholic church in Austria show that the changes in one area of the skull affect the shape of other areas. Furthermore, the shapes of human skulls, even within an isolated tribe, vary considerably. Different races also have distinct skull shapes. Some children with congenital “water on the brain – hydrocephalus” develop a different skull shape than their parents. Our skulls are the only part of our skeleton that keeps growing as we age. Evidently the people who died in Dmanisi were humans who lived geological eons ago, perhaps around Jobs days ~ 4,000 Earth rotations ago.

How could vast eons also be 4,000 years? Western people have a unique concept of linear time, unlike the world view of any ancient people.

When trying to understand human history, it is important to base your stories on a correct assumption. Western people begin their thinking with an idea developed by medieval mendicant friars: that the essence of substance is changeless. They use this idea to speculate that clocks measure linear time. Yet we can see the past. Atomic clocks that transmitted their light from ancient galaxies shone at tiny fractions of the frequencies of modern atoms. When NASA compared hydrogen maser atomic clocks with their transponded signal from hours ago, the clocks were observed to steadily accelerate relative to increased distance and the speed of light. Local atomic clocks seem to be accelerating with the same ratio (Hubble’s) relative to distance as the observed light clocks in hundreds of billions of ancient galaxies. When we compare star stream orbits in galaxies at many ranges, we observe that the orbits accelerate outward along with the accelerating atomic clocks. Billions of galaxies grew into growth spirals as the visible properties of matter continued to change. Not a single physical constant is visible when we compare ancient matter to modern matter.

3,000 years ago, people thought that their ancestors lived for eons, while they lived shorter lives. Their records of the planets do not fit our ideas about linear time and clock-like orbits. The Venus Tablets of Ammizaduga only fits a much smaller solar system. During the Old Testament era, people everywhere remembered close planet passages and the shattering of a nearby planet. The Bible mentions both kinds of events in Job, Joshua and Isaiah.

What could cause days and years to keep on accelerating throughout history? Gravity! What is gravity? It evidently is an emergent phenomenon. As atoms age, they change relationally: their clock frequencies, their inertial properties and the space they take up all change together. How could gravity produce vast eons in few years? Three different experiments show that gravity has an aberration. The Sun’s gravity travels at light speed and therefore pulls on Earth leading hemisphere more than the trailing half. This tiny offset steadily accelerates Earth’s rotation as it gradually pushes Earth’s orbit outwards. It also causes the logarithmic planet spacings from the sun, which we also notice in the planets around nearby stars. This is because the imbalance from gravity aberration increases with distance. The outer planets experience more gravity aberration than the inner ones.

How old is the Earth? The Bible repeatedly uses eon words for the Old Testament era. Jesus came at the consummation of the eons. Jacob said his days and years were shorter and worse than those of his fathers, even though his father lived more years than his grandfather. Old people today remember how much slower life was in their youth. The optical parallax to the Sun and planets keeps on decreasing, even since radar and clocks establish the canonical AU. Everything in the universe is changing, even the duration of days and years. Think about it.