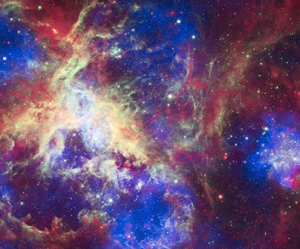 On the night of February 23 / 24, 1987, Ian Shelton used the Las Campanas Telescope to photograph the Tarantula nebula in the Large Magellanic Cloud (LMC). At 2:40 in the morning, he noticed a bright spot on a photograph that was not there previously. It was the first light from SN1987A, the closest supernova since 1604. The International Ultraviolet Explorer monitored the UV light from the outburst that rapidly darkened  and then brightened again with peaks on days 80, 240 and 400. Astronomers proposed that the light was reflecting from a ring of gas around the star with a radius of 80 light days (angular size: 0.808 arc seconds). Using the reflection delays, astronomers calculated that the light was in transit for 168,000 modern years.

Westerners have a linear concept of time, which is the basis for many scientific measuring units. Using their mathematical notions of time, scientists  often claim that SN1987A is evidence against biblical creation. The Magellanic clouds are actually evidence for creation. 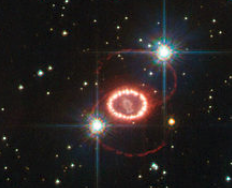 We often observe that small galaxies clump around large galaxies, as though they are offspring. Sometime

s hundreds of miniature galaxies are packed in clusters around giant ellipticals that are awash in X-rays. In some cases we observe star globs at the end of a jet as they emerge from their parent elliptical. When we compare the shape of countless galaxies at many ranges (eras) we observe dense star globs emerging, spreading out and rotating out as billions of galaxies grew into huge growth spirals. We even observe local Herbig Haro stars ejecting bi-polar streams as they continue to form dusty nebulae in the Milky Way. The picture of the double jets emerging from  HH47 is in the public domain, since it comes from NASA.

Please read creation day 4 on this web site for the biblical version of how the stars formed.

Half way through the creation week. He continued to form the Sun, Moon and stars and continued to make them into things that spread out (Hebrew raqia). He continues (in unbroken continuity) to call the stars out by name (Isaiah 40:26) He spreads out thin clouds from dense things (like molten bronze – Job 37:18). A scientist might insist that they measured 168,000 years. They actually only compared two dissimilar things, an ancient erupting star with modern days and years. In order to make such a claim they had to ignore the visible evidence from billions of ancient galaxies. We observe that ancient atomic clocks ticked at tiny fractions of the frequencies of modern atoms with the nearest atoms ticking the fastest. Even local atomic clocks, when compared to their radio reflections from hours ago (the Pioneer Anomaly), are similarly accelerating. We observe in cosmic history how matter’s volume, inertial properties and its clock frequencies change relationally (together) as the star streams in billions of galaxies accelerated out, rotated out. Galaxies , intrinsically grew from an originally

unformed state of matter. The Magellanic galaxies are nearby evidence that God continues to form the stars and to make them into spreading things (Hebrew raqia). Even the Earth continues to grow, as it’s matter continues to receive form as a relation with light. The Bible states: that the Earth spreads out in unbroken continuity above the waters (Psalm 136:6).  Indeed, the continents fit together on a tiny globe without major surface seas. Attribution of the growing Earth: Michael Netzer under a CC 3.0 license.

The picture at the head of this article is a composite of 30 Doradus (the Tarantula Nebula). X-rays taken by Chandra are blue, visible light from Hubble is green and infrared from Spitzer is in red. Credit: NASA/CXC/PSU/L.Townsley et al.; Optical: NASA/STScI; Infrared: NASA/JPL/PSU/L.Townsley et al.