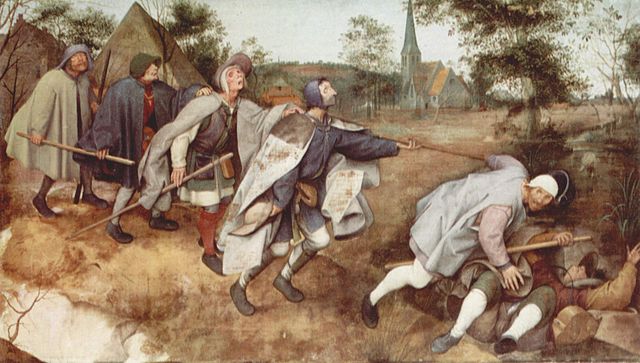 Paul warned in Colossians 2:8 of several things that can take us prisoner (Greek sulagogeo). Watch out for philosophy, empty deceit, the teaching of men and the rudimentary principles of the orderly system (stoicheia tou kosmou). Stoicheia are elementary principles that serve as a foundation for a structured way of thinking. People can be enslaved by their passions, their religions and their way of thinking. Our minds can also be imprisoned by the elementary assumptions of philosophy.

Peter warned of a particular idea that will exist in the last days. He predicted that mockers will come asking: where is the promise of His coming? They will claim that, since the fathers died (fell asleep), all things remain the same. He used a phrase “arche ktisis” – that can mean a “first law” with respect to this idea.  Everyone observes change everywhere. Mountains push up, the seasons change, plants grow, babies are born and grow old. So what do the mockers mean – that all things remain the same?

Peter predicted two things that the end time mockers do. They are oblivious of the fact that the heavens were “out of” “old” (Greek ek palai). They also reject the evidence that the early earth emerged from water and later perished by an overflow of water. Notice that both of these predictions refer to natural histories. Peter said they do this because they think all things remain the same. (The Greek does not use the definite article, so it means all things that exist remain the same).  Could this be one of the elementary idea that will grips minds with illusion in the last days?

Western science was founded on the elementary assumption that matter is not changing itself with age. The medieval Catholics “solved” the problem about change that the Greeks struggled with. They used their concept of an unchanging God to imagine that what He created also has an unchanging being. They did not reject the visible evidence that everything is changing. What they imagined was that what matter is, its intrinsic properties, its essence (from the Latin verb to be – esse), does not change with age.

Since Peter warns of this idea, it evidently is a false principle.

Since western science was founded on this idea, then there may be a serious error at the foundations of science.

What Peter predicted has come true. Scientists obfuscate visible galactic history, that the stars came out of formerly, naked galactic cores. They reject the evidence that the earth emerged out of water, as the waters seeped underground. During the garden era, the Earth was a single continent without major surface seas. The continents only fit together on a minuscule planet and the floors of modern oceans only formed as the continents spread apart. Peter said  the Earth was later destroyed by waters. The picture of how the Earth grows, as the continents stay rooted in place as new oceans form and spread out is from Michael Netzer under CC 3.0 license.

Changing Earth Creationist do not interpret earth history or creation with science. That does not mean we reject simple, visible evidence. However, we reject any synthetic “evidence” that depends on the notion that matter is not changing itself as it ages. Why? Because such evidence is assumption dependent, contrived with the assumption that matter is not continually changing itself relationally.

This is why we question empirical and mathematical claims. Empiricism and mathematical models of reality were contrived with the notion that matter is not changing itself.  We reject scientific stories about a universe that is 99% invisible and crammed full of magical things. Those things were invented to protect the basic creed of all scientists, that matter is not intrinsically changing itself as it ages.

We also anticipate that the biblical God will reduce science to utter folly. Man cannot come to know Him personally through humanistic wisdom.  How will it happen? New telescopes are observing the creation age. The visible history of the universe only fits a literal interpretation of biblical creation and biblical earth history. What we observe is utterly unscientific because it contradicts the basic creed of scientists, the idea Peter predicted for the last days.

The picture is of Pieter Bruegel’ 1568 painting of the Blind leading the Bind. The copyright holder, Zenodot Verlagsgesellschaft mbH has released this picture under the GNU Free Documentation License. Open your eyes and look at cosmic history. Every atom shining from billions of ancient galaxies shone at much lower frequencies back when the stars began to expand and spread out. Countless galaxies intrinsically grew into huge, growth spirals.