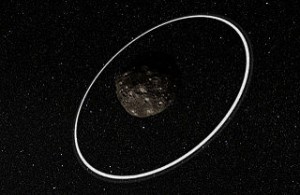 Chariklo is a centaur. It has characteristics of both a comet and an asteroid. It has a diameter of about 250 kilometers and orbits in an unstable region between Saturn and Uranus. On June 3, 2013, Chariklo passed in front of the star UCC4248-108672. The star’s light blinked twice, followed by 1.2 seconds of starlight, 1 second of dark, 1.2 seconds of starlight and two more short blinks. Evidently the asteroid has two rings around it. The inner ring is only a little more then the diameter of the asteroid above the surface. Cariklo is as dark as asphalt but infrared observations find the signature of water. The water signature continued to dim from 1997 – 2008. This suggests that the rings are ice and were edge-on in 2008. The image is an artist’s rendition of what Charliko might look like. Source: http://www.eso.org/public/images/eso1410b/ Author: ESO/L. Calçada/M. Kornmesser/Nick Risinger (skysurvey.org) Licensed under the Creative Commons Share Alike Unported License from wikipedia. All the gaseous planets have rings, but this is the first ring system discovered around an asteroid.

How do ice rings form? NASA photographed more than 90 geysers ejecting water into space from the south pole of Enceladus. The geysers are forming an ice ring along Enceladus’ orbit. Cassini discovered a thin atmosphere made up of 91% water vapor, 4% nitrogen, 3.2% carbon dioxide and 1.7% methane around this moon suggesting that gas erupts along with the hot water. Scientists explain Enceladus’ jets with tidal friction. Yet the geysers are at the south pole, an area that should have minimum tides. (Polar tides are often lower than tides near the Earth’s equator).  Astronomers also detected water ejecting from the south pole of Europa. Two geysers periodically eject from the asteroid Ceres. Did geysers on Chariklo form its ice rings? Charliko and Ceres are thought to be too small to have internal heat.

On day two, according to the Hebrew text of Genesis One, God continued to command (imperfect verb) a spreading atmosphere (Hebrew raqia shamayim) to form between the water above the spreading atmosphere and the water below. Moses used the word raqia (something that spreads) five times for day two. According to the Hebrew of Proverbs 8:28, God made rigid the skies above when the fountains (geysers) of the deep were powerful. According to Genesis 7:11, the crevices of the sky (uarbth e-shamayim npthchu) were opened during Noah’s cataclysm.

Dr. Frank of the U. of Iowa photographed streaks in the UV background near the area of Earth’s bow (dawn) from space. He calculates that the Earth gets hit (on average) by 20 house-sized, dark snow balls each minute. For some reason, twice as many hits occur between June and November. Ten million large snowballs hitting Earth per year would change the level of the oceans by means of extra terrestrial rain. The picture is from the small comets page at the University of Iowa and shows a stream of water streaking down through Earth’s atmosphere high above the pole. (The bright yellow is Earth’s daylight side.) Notice the aurora ring around the Pole and the dawn terminator. http://smallcomets.physics.uiowa.edu/VIS9627080957.GIF 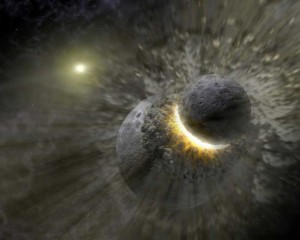 Perhaps the snowballs are returning remnants of the ancient ice that once surrounded the Earth. Ancient societies described the shattering of a watery planet, which the Bible mentions four times using similar descriptive words as those used by the Canaanites. Asteroids and periodic comets are evidently parts of a shattered, watery planet that had different deuterium ratios than Earth’s water. The drawing  of a collision between a moon and planet is from NASA, in the public domain.

Someone might argue that the escape velocity of Earth is 47 times that of Enceladus. Our gravity is so great that a surface geyser could never eject water into space. Such a statements is based on a fundamental and unsupported assumption – that the early Earth was like the modern Earth.

According to the Genesis 10:25 the Earth (erets – land) was divided (peleg or palag verb) during the days of Peleg, five generations after Noah. All ten instances in the Bible where we find the word peleg  involve water. What was the Earth like before it was divided by water? During Adam’s days, it did not rain and water flowed up out of the ground to water the face of the Earth and rivers flowed around the land, not into the sea. Genesis also uses the singular word for land, evidently a single continent.  The seas (Hebrew plural) were underground in that era, in the subterranean tehom, having seeped underground during day two.

Earth was a much smaller globe before new oceans divided the continents. Three times the Bible says the Earth spreads out in unbroken continuity (Psalm 136:6, Isaiah 42:5 and Isaiah 44:24). Isaiah 42:5 even explains that what is born (or emerges) from the Earth also spreads out. A global expansion seam runs through every ocean continually oozing out basalt that forms new seafloor. The youngest seafloor is adjacent to the expansion seam and the oldest next to the continents. Earth’s continents fit together on a globe about half its modern size. This gif is from Michel Netzer and shows how the continents fit together on a tiny globe, before the modern seas began to form (Under CC License 3.0).

Why should the Earth continue to grow in size? Zechariah 12:1 tells us that God actively and in unbroken continuity continues to lay the foundations of the Earth. How could he do that? On Day One, the Earth was unformed and dark. Then God’s wind intensely dithered above the Earth’s surface as he continued to command light to continue to be. Indeed, light continues to dither around within all matter giving it extension to this day. Matter is not particles. It is a relation with light (Ephesians 5:13). Evidently he is still commanding light, thus continuing to give form to the unformed matter in Earth’s core.

Did the tiny Earth have the same inertia? Huge dinosaurs one roamed the Earth. If they were alive today would be too heavy to stretch out their long necks or run, as their tracks show they did. Dinosaur bones are porous, like a bird’s.

Someone might claim, We measure gravity and it does not change. You are circularly measuring your assumption. What assumption? The one the Bible predicted for the last days. What is it? The notion that all things remain the same (2 Peter 3:3-6). Western science was built on the assumption that matter remains the same; that yesterday’s atom is identical in “essence” to today’s. Even the definitions of matter and time, the measuring units and the mathematical laws of physics presume that the properties of matter are not changing relationally.

The visible history of how galaxies formed shows atomic clocks accelerating along with the outward accelerating star streams as billions of galaxies grew from “what is not seen.” The Bible explains that God commanded the plural eons to passively form from unseen things, exactly as we observe in cosmic history. Matter continues to change its properties in an orderly relational way as described in the Greek text of Romans 8:19-22.