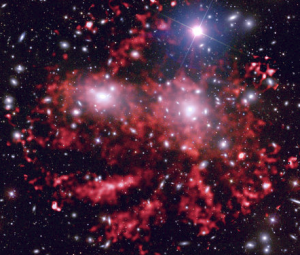 This is a combination picture of the Coma Cluster uses red to represent intense X-rays. The white and blue objects (except for the nearby stars with diffraction spikes) are galaxies imaged by the Sloan Digital Sky Survey. (Credit: X-ray: NASA/CXC/MPE/J. Sanders et al; Optical: SDSS)

About a thousand galaxies surround two giant ellipticals in the Coma Cluster. The large fuzzies are the ellipticals, surrounded by streams of smaller galaxies. Galaxy clusters are normally awash with X-rays, with the most intense rays around  the central galaxies. In the Coma, however, the Chandra telescope detected X-ray filaments containing long strings of galaxies spreading out from the large central galaxies. It achieved these views with extra long exposures and then filtering out the less energetic X-rays. 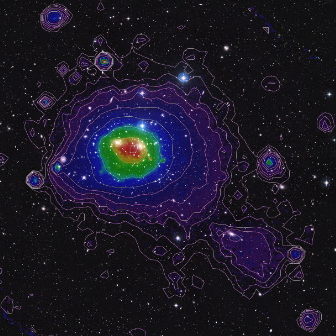 Astronomers estimate the diameter of the Coma cluster at 25 million light years. The photo on the right is a combination from the Hubble (the white light) and X-ray data from ROSAT. Two large, white, elliptical galaxies lie in the center of the cluster. The X-rays are strongest around the ellipticals and form a tail moving to the lower right.  Image credit: MPI (ROSAT image); NASA/ESA/DSS2 (visible image). Acknowledgement: Davide De Martin (ESA/Hubble)

The standard astronomy story is that stars accreted from space clouds, then gravitated into small galaxies, which came together into clusters. How could galaxies so far apart gather together into such an enormous structure? Why does the space around the galaxies shine with intense X-rays tendrils, yet the galaxies within the tendrils shine with less energetic light? The journal Science claims that the Coma cluster is in motion and a head wind stripped gas that shines in X-rays from the galaxies.

First (in precedence or importance – Hebrew bereshit) God created (completion) the plural heavens and the Earth (the entire universe). But (Hebrew waw character) the Earth was (completed verb) unformed (tohu wa bohu). How did the Earth receive form? Elohim’s wind dithered in unbroken continuity above its primordial, dark surface as He continued to command light to continue to be. Modern atoms have 10,000 times the volume of their active parts as light continues to dither back and forth within. Indeed, light dithering around internal to all matter evidently is what gives them etension.

Half way through the Creation week, God continued (Hebrew imperfect verb) to form the Sun, Moon and stars (the lights in the heavens) and continued (imperfect verb) to make them into things the spread-out (Hebrew noun raqia). Several Old Testament passages explain that God continues, in unbroken continuity, to spread out the heavens. The New Testament also affirms that the heavens are out-old (ouranoi esan ek palai – 2 Peter 3:5).

What we SEE in cosmic history (at many ranges with telescopes) confirms the literal creation account. We see globs packed with tiny, close-together stars around the cores of early, miniature galaxies. Evidently the stars continue to emerge from the unformed matter God created first. Perhaps the bursts of gamma light, that arrive from the early universe on a daily basis, are God at work, continuing to command light to continue to be, thus energizing matter. At many ranges, jets emerge from stars to form nebulae, quasars emerge from active galaxies and long strings of smaller galaxies emerge from ancient ellipticals. The Coma Cluster evidently emerged from the unformed matter in the core of the two central, giant ellipticals. The X-rays tendrils are evidence for energetic ejections.  Even the local Magellanic galaxies

are connected to the Milky Way by a river of neutral hydrogen. This is evidence that they were ejected from unformed matter at the Milky Way’s core. Image credit NASA.

Why do scientists insist on the accretion of everything from space dust? Why do they invent five times as much magical, invisible matter as the natural, visible kind? Why do they speculate that the vacuum of space time pushes galaxies and stretches all light passing through the void? All scientists have a historical creed, which is the basis for their physics definitions, most of their empirical measuring units and their mathematical laws.

What creed? The Bible predicts that in the last days mockers will come with an arche ktisis (first law) that all things remain the same 2 Peter 3:3-5. Indeed, western science was founded on a medieval assumption that the essence (the intrinsic properties) of matter are fixed, NOT continually emerging.

Someone might insist that a thousand galaxies could not have spread out into the Coma cluster in only 6,000 years. Please look at the universe with sight, instead of speculations about the existence of linear time. Visibly, the atomic clocks accelerate along with the outward accelerating star streams as billions of galaxies grew into huge growth spirals. Even local atomic clocks, when compared to their transponded reflections from hours ago (Pioneer Anomaly), are seen to accelerate in the same manner relative to distance (the Hubble ratio) as we observe in hundreds of billions of ancient galaxies.

A few thousand years ago our ancestors recorded close planet passages (which the Bible also mentions). They recorded how  the early people lived for geological ages (see Job 14).  Evidently everything changes, clocks and orbits together, and this has been happening for a great while.

Lift up your eyes and look at galactic history! Glorify the Creator whose creation vanquishes science.