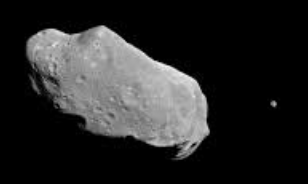 How does an asteroid capture a moon? There are hundreds of asteroids that are binaries or have moons. Back in 1993, Galileo photographed the asteroid 243 Ida with a tiny moon, Dactyl, orbiting about 90 kilometers away.  Dactyl is the small round spot to the right of the shattered rock we call: Ida. The image is in the public domain from NASA. Radar even detected a passing asteroid with three moons in 2008. Here is a list of asteroids with satellites. http://www.johnstonsarchive.net/astro/asteroidmoons.html

This animated gif shows the radar image of asteroid 1998 QE2. The moon is the small white moving object (~600 meters long) orbiting a 2.7 kilometer asteroid as it rotates in the background. I used Gimp 2 to assemble the radar images. Original images from NASA/ JPL-Caltech/ GSSR.

Let’s try to imagine how Ida might capture Dactyl, since we know their size, orbital speed and distance, (which I do not know for 1998 QE2). The capture of Dactyl is impossible, according to the laws of gravity. The Sun’s pull on Dactyl should be four times as strong as the asteroid’s at its orbital distance (90 km). At this distance the escape velocity is ~9.3 meters / second. The capture window for Ida is also extremely narrow. The moon must approach at a relative speed not to exceed the escape velocity at each point in its approach. If it comes in too fast, it will swing around and escape. If it comes in slowly, it will spend so long in its approach. The tiny asteroid’s gravity will accelerate it enough so that it will eventually exceed escape velocity. Even if the moon bounced off the surface, or was affected by the gravity of a third body, capture (according to the laws of gravity) is impossible. Yet we observe numerous asteroids with moons.

The Bible, in few words, mentions the shattering of a nearby planet in Isaiah 51:9; Job 9:13; Psalm 89:10-11; Job 26:11-12. How do we know these refer to a planet smashing? All societies 3,500 years ago told stories of close planet passages and the crushing of a nearby planet. The biblical passages use similar descriptive language as a Canaanites used to describe a planet-god battle. Yet the Bible denies that the planets are gods and forbids their worship. When the Bible was written, people would have understood such references with the earth histories of that era.

Changing Earth Creation is not a new theory. It is simply trying to understand biblical creation and earth history in the grammar and epistemic system of the biblical author. There is not a single verse in the Bible that would have been understood with a scientific mindset by a contemporary.

How did the scientific way of thinking develop? The first who tried to invent science were the pagan Greeks. They were unable to invent an empirical science because their present tense of the verb to be (einai) did not refer to static things. In their world view, everything in the universe is continuing to change. More than a thousand years later, Catholic medieval scholars, in their efforts to tailor the Bible to fit Aristotle’s system, finally “solved” the problem of everything changing. Their Latin grammar and their concept of a changeless God allowed them to imagine that the essence of substance is changeless. Over the last few centuries, western scientists invented synthetic definitions for matter and time, mathematical measuring methods and laws of physics, based on their assumption that matter is not changing itself relationally.

If a planet was shattered in a collision, rocks that were adjacent to each other before the collision would likely be traveling near the same speed and direction as they moved off together. In that case, capture could happen as the asteroids were formed during a planet shattering. The moon Dactyl has a similar composition as Ida! Asteroids and comets have rocks that on Earth formed deep underground, under volcanic conditions. Is it significant that they contain rocks, like cubanite, that only form in warm, liquid water yet today those bodies are frozen? It is significant that they have irregular shapes and long cliffs as though they are pieces of shattered planets?

Changing Earth Creationists can accept that a planet was shattered a few thousand years ago because (1) the Bible uses the same descriptive words that the Canaanites did for a planet shattering; (2) it was common knowledge in the biblical age; (3) and the visible evidence supports it, since we observe throughout cosmic history that the properties of matter continue to change. The Bible states that the creation is enslaved to change (Romans 8:21). Paul used orderly submission verbs and together verbs to describe this universal corruption. By simply rejecting the assumption upon which western science was contrived, we are able to accept visible cosmic history, the only history that we see as it happened.