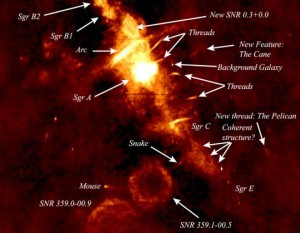 The center of the Milky Way is so dusty that astronomers can only see it with radio, infrared and X-ray telescopes. Scientists claim that at the very center lies an invisible black hole called Sagittarius A-star (Sgr A*) whose diameter, they allege, is double the distance from the Earth to the Sun. Supposedly, Sgr A* has enormous gravity because it sucked in the equivalent of four million suns. Scientists think black holes have so much gravity that light cannot escape. They think that infalling gas emits X-rays, which allows a black hole’s surroundings to sometimes glow. The map (taken at 1 meter radio wavelengths by the VLA) shows clouds, jets and the remnant of explosions  in the vicinity of Sgr A*.  The bar that runs diagonally through the center of our galaxy extends out to connect to our galaxy’s emerging arms. Credit: Kassim et al. Naval Research Lab and NASA’s APOD – in the public domain.

Each day, the SWIFT X-ray telescope observes Sgr A*. On April 26, 2013, the center of the Milky Way fired off a 32 millisecond X-ray burst. Evidently this outburst was from a magnetar about 3″ from Sgr A*. Sgr A* remains a billion-times quieter than scientific predictions for a black hole in a dusty environment.

In 2003, astronomers discovered a hydrogen cloud, called G2, near Sgr A*. In 2011, Stefan Gillessen, from the Max Planck Institute for Extraterrestrial Physics, predicted that G2 would fall into the black hole in the summer of 2013. I predicted G2 would not be eaten because black holes don’t exist. Indeed, the cloud stretched into a double jet with distinct blobs at its ends. When the cloud failed to preform as predicted, some astronomers claimed that nearby black holes were stretching the cloud.

Some claimed G2 was just circling around and its tail would spiral in March 2014. I predict that G2 will move away from Sgr A* because black holes do not exist. Indeed, throughout 2013 and 2014, Sgr A* has been decreasing its X-ray activity and the cloud has stretched into a double jet. This is the opposite of the predictions of X-rays as gas spirals into the invisible place.

This sequence of VLT images shows how the G2 cloud has changed over nine years. Notice how it stretched out and ejected globs, the opposite of what should happen in the vicinity of the powerful gravity of a black hole. The image is from the Max Planck Institute for Extraterrestrial Physics.

In November 2014, the Astrophysical  Journal Letters published a theory from Andrea Ghez from UCLA. She explained that the G2 cloud formed when two binary stars merged under the influence of the powerful gravity of the black hole.  The merging allegedly produced the double ended jet that is spreading out. Kuhn and Popper document how scientists often shore up failed theories with auxiliary hypotheses. In this case, the unfalsifiable notion that the undetectable hole caused two undetected binary stars to merge, produced the opposite effects from what scientists predicted.

The ALMA millimeter wave telescope will join with distant radio telescopes to form a Very Long Baseline Interferometry Array in 2015. Scientists hope that this will image the shadow of the SgrA* black hole as it is illuminated from in falling matter. I predict that, if anything, the ALMA array will view matter emerging and spreading out from a point source, as per the text of Hebrew 11:3, God commanded the plural eons to passively form as visible things appear from things not seen. It will not see the shadow of a black hole, because black holes do not exist.

Emerging, pulsed jets are common at many scales all over the universe. M87, a giant elliptical, has a pulsed jet, longer than its radius, emerging from its nucleus. Active galaxies are often surrounded by

radio lobes and quasars often shoot out pulsed jets. The Milky Way has two gamma lobes perpendicular to the disk and of the same diameter. Local Herbig Haro stars eject knotted double jets that are visibly forming huge dusty nebula. Many emerging jets move straight, without bending as they emerge. They act as though they initially are made of matter with minimal inertia and emerged from areas with minimal gravity. This is a picture of the star HH47, shooting out long double jets. It is in the public domain from NASA

The literal, Hebrew creation text explains beginnings, that we confirm in visible cosmic history. First God created (completion verb) the entire universe, the heavens and the Earth. At that point, the Earth was (completion verb) unformed and dark. How did the Earth begin to receive form? God’s wind intensely dithered in unbroken continuity (piel participle) on the face of the dark Earth and He continued to command light to continue to be. To this very day, light never stops dithering around within matter giving it extension and other properties. We observe the simple evidence that matter is a relation with light.

Half way through the creation week, He continued to form the Sun, Moon and stars and continued to make them into spread out things (Hebrew noun raqia). Evidently He continued to give form to these objects by commanding light to continue to be just as He gave form to the Earth. About once a day NASA detects intense bursts of gamma light arriving from the creation era. Perhaps this is the visible evidence for God continuing to command light to be, thus energizing and giving extension to the formless things He created first.

As matter is energized by light, it emerges and spreads out, as we observe. Some of the earliest galaxies were naked, without starry appendages, and shine at less than 10% of the light frequencies emitted by modern atoms. Closer galaxies sometimes have equally-spaced chains of blue globs surrounding a redder core. At many ranges and in billions of examples, we observe how globs, packed with stars, accelerated out from unseen things – to form great, dusty, local, growth-spirals. Where did they accelerate out from? From the unformed matter God created first. Visibly, the atomic clocks, the inertial star streams and matter’s volume all change relationally as billions of galaxies grew from unformed, unseen things.

According to the Hebrew Bible, He continues to call the stars to come out, to spread out the heavens. Even the Earth continues to grow as God continues to lay the foundation of the Earth. Please see the Hebrew grammar in Zechariah 12:1. He continues, in unbroken continuity, to spread out the Earth. Indeed, the continents fit together on a tiny globe without major surface seas. The gif of the growing Earth as new seas grow and separate the continents is from Michael Netzer, who allows publication with attribution under a CC3.0 attribution license.

Why do scientists imagine that stars accrete from space dust, when we observe jets emerging and spreading to form great dust nebulae? Scientists are simply protecting their historical, medieval faith that the properties of matter are fixed, not emerging.