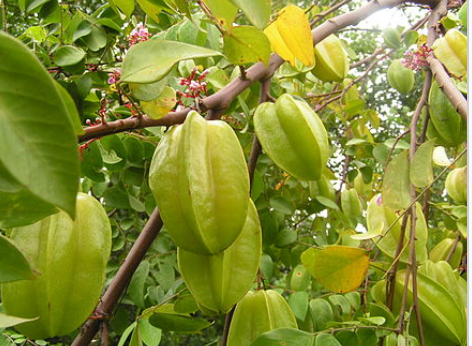 On Day six, God instructed that Adam and Even, the land animals and the birds, were to eat fruits and vegetation. The photo of carambola fruit is from wikipedia, user pinay6.

Skeptics often claim that Genesis chapter 1 conflicts with chapter 2. In ancient Hebrew one lists when something happens by referring to events in the narrative, not to time (as in western languages).  Many biblical narratives are not arranged chronologically. Ancient people did not have a rigid concept of time as westerners do.

Genesis 2:5 says that no “shrub of the field” was yet in the earth and no “plant of the field” had yet sprouted – for it had not rained and there was no man to be tilling the ground. Skeptics claim this is a contradiction, since plants were created on day three (Genesis 1:11 -12). The shrub-word in Hebrew often refers to a dessert bush. The text explains why there were no desert bushes. Water came out of the ground to water the entire face of the earth. A fully watered world is incompatible with deserts.  Later, when deserts formed, God acclimatized some plants to exist in a changing environment. According to Psalm 136:6, God causally and continually (hiphil imperfect verb) preserves man and beast. The Lord is good to all and his mercies are over all his works (Psalm 145:9).

What about the “plants of the field?” The text explains there was no man (Hebrew uadm – Adam) for tilling the ground. Genesis 3:18 When God cursed Adam for his disobedience, He used the same phrase “plants of the field.” Adam was to eat the plants of the field – in the sweat of his face he would eat bread. When did God change some grasses into grain producing plants? Evidently when Adam could no longer eat the fruits in the garden and had to till the soil for bread. Job 39 explains how God manages creation. He changed lions from herbivores to carnivores. Millions of parallel changes are required to change a herbivore into a carnivore. God is constantly active in his creation.

There are 70 Hebrew verbs relating to the events of day-six. Only nine of them (13%) refer to completed commands or actions. Imperfect verbs and participles refer to continuing or repeated actions. They are not equivalent to the past tense, traditionally used in modern translations. Ancient Hebrew had no verb tenses. We should take care not to tailor the text to fit our tensed grammar or our speculations about time, which had not yet been invented when Moses wrote of creation.

When Elohim (the plural God who uses singular grammar) speaks to Themselves, the speaking continues as though the planning continues. With respect to creating man, when he made the woman, the text use perfect (completed creation) verbs. Man and woman were both created in the image of God.

Genesis 1:29-31  Then God continued to say, “Behold, I have given you (completion) every plant continually yielding seed that is on the surface of all the earth, and every tree which has fruit yielding seed; it shall be food for you; and to every beast of the earth and to every bird of the sky and to every thing that moves on the earth which has life, I have given every green plant for food”; and it was so. God continued to see all that He made (perfect verb), and behold, it was very good. And there was evening and there was morning, the sixth day.

How long was day six? During Moses day, people could not draw history with equal spacings on a straight line. Ideas about linear time did not come on the scene until 3,000 years later. All ancient people adjusted their dynamic calendars to fit the cycles of the heavens. They tuned their lives the continually changing cycles of nature and also counted years with the same cycles. Westerners regulate life with fixed symbols, ideas about linear clocks and fixed calendars and to force nature to fit their linear perspective. Ancient people had no constants even with respect to days and years. They thought the first people lived for eons and that the earliest days were the longest. Jacob said his days and years were shorter and worse than the days and years of his fathers, Genesis 47:9, which was in keeping with how the ancient poets saw history. To this day, old people notice that days and years speed up as they age.

In the ancient way of thinking, a primordial evening and morning took eons compared to a quick later evening and morning. Have you ever wondered why ancient people traveled much farther than we can in the same using the same means of locomotion? (Jacob drove suckling lambs from the Euphrates to the mountains of Gilead in seven days).  It would take months to travel the same road in the same manner today. Xenophon and Alexander could march further in a day than modern armies can by the same means.

The ancient notion that earlier days were longer than later days fits the ancient notions of degenerating lifetimes. On days six, the process of examining and naming all the land animals and birds would have taken Adam several modern years. Yet he did it in a fraction of day six. Then God put Adam into a continuing deep sleep and took one of his bones and fashioned from it the woman. She was to be his companion, from his side, not his superior or his foot stool.

When Adam met Eve, he continued to say, this is now (pa’am) bone of my bone. Pa’am refers to repetitive things like strokes, hoof-beats and footsteps – used to mark durations. After all that Adam had seen and cataloged on that long day, at last he sees the woman and names her what she was, out of man. Then God established the first law for all generations, that a man should leave his father and mother and cling to his wife and they should be one.

Adam lived for 930 years, twelve times as many years as modern people. Do you notice life speeding up as you age? Those interested in primordial notions of time and history should read Mircea Eliade’s The Myth of the Eternal Return (Cosmos and History). You should also read ancient poems on how the golden age turned to iron  (Ovid’s Metamorphoses and Hesiod’s Works and Days).

The optical parallax to the Sun has continued to decrease since the Greeks first measured it 2300 years ago. It has continued to decrease even over the last 50 years, since clocks and radar canonically defined the AU. We can see the evidence that ancient orbits were much slower than modern ones in the only history that is visible as it occurred, cosmic history. In billions of spiral galaxies at many ranges (eras), the star streams spread outward, the star orbits not closing.  Billions of galaxies grew from tiny naked globs into huge, local, growth spirals. Orbits that spread out are by nature accelerating (relative to their previous state).

What we observe in all directions and many ranges, fits what the Bible says began on day four. He continued to form (imperfect verbs) the Sun, Moon and stars and continued to make them into things that spread out (the noun raqia). The text of the Bible plainly denies the western notions of linear time. Why should days and years continue to accelerate? Consider gravity aberration that continually spins up earth rotation while concurrently pushing our orbit outwards. Gravity aberration is the reason why days and years steadily accelerate. You can read about gravity aberration on this web site.