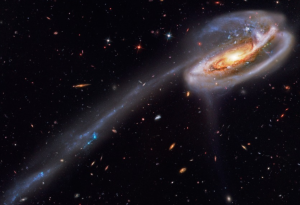 Physicists claim that Earth’s momentum (mv) cannot change unless it is transferred to or from another body by impact or gravitation. Momentum is an assumption-dependent calculation, not something freely observed in nature. Scientists also allege that energy, the ability to do work, is conserved. They tell us that the total energy in closed systems remains the same, although energy can change form. We only observe energetic processes and never any isolated energies.

Energy like momentum, exists in the world of mathematical reality. Scientists calculate them using their operational definitions of mass, distance, time and gravity. An operational definition is not concerned with whether time, energy or mass actually exist.  It simply defines them using a measuring technique that circularly depends on the medieval assumption that “the essence of substance is changeless.”

The principle of conservation is a tautology. Energy is actually defined in a circle using an assumption. When high speed objects impact with more momentum than calculations predict, scientists claim that mass / energy does not change. The definitions of mass, time and energy were contrived with a metaphysical assumption that is simply accepted by faith. They also support each other in a circle. No one has ever detected any mass, energy or time. They are mathematically calculated with the medieval assumption that the intrinsic properties of matter (what the Catholic scholastics called essence) is changeless.

Peter, a disciple of Jesus, predicted that in the mockers of the last days will claim “all things [that exist – no definite article in Greek] remain the same (panta houtos diamenei – 2 Peter 3:3-4).” Indeed, the notion that matter is not continually changing, changing relationally, is the basis for most physics definitions, most scientific measuring units and the mathematical laws of physics. Peter predicted that the mockers willingly ignore that the plural heavens were out-old (Greek ouranoi esan ek palai) because they regard the notion that “all things remain the same.”

Peter’s prophesy suggests a way to test the laws of conservation. Cosmic history is the only continuum that we observe at many ranges with telescopes, as it happened. Psalms 19 says knowledge is available to all of God’s glory in the plural heavens (shamayim), the spreading place (raqia). Isaiah 40:26 commands us to lift up our eyes and see who created the stars that causally continue to come out in unbroken continuity. Indeed, telescopes show strings of star globs that emerged from the core of billions of galaxies as they grew into huge growth spirals.

Galactic history is visible evidence for the grammatical creation account. First God created (completed verb) the entire universe, the heavens and the Earth. Did He create a big bang? The word for heavens in Genesis 1:1 is plural, suggesting that he finished creating many objects. What did the plural heavenly objects look like? We are only told what the early Earth was like. The Earth was (completed verb) dark and unformed. How did the primordial Earth receive form? Elohim’s wind dithered in unbroken continuity above the dark, primordial surface (paniym) and He continued to command light to continue to be. To this day, light dithers around within all substances giving them extension. Evidently, matter is a relation with light as we observe in countless experiments.

Half way through the creation week, God continued to form the Sun, Moon and stars and continued to make them into things that spread out (raqia). Indeed, we observe that many early galaxies were naked, not spread out like closer galaxies. At many ranges, we observe strings of equally spaced star globs emerging from their galactic cores and spreading out. Did he give form to the stars in the same manner as he gave form to Earth, by commanding light? We observe great bursts of gamma light (GRBs) around ancient galaxies, often where their starry arms are forming. Perhaps this is God commanding light to continue to be, thus giving form to the unformed matter he finished first. At many ranges we observe how billions of galaxies grew into huge growth spirals. The space matter takes up, its clock frequencies and its inertial properties change relationally (that is together) as billions of galaxies grew outwards from their minuscule cores. Visible cosmic history confirms Paul’s statement that the creation is enslaved to change (Romans 8:21). Paul used orderly arrangement and together verbs to described this universal corruption. Things that change together, in an orderly way, change relationally. In relational change, none of the properties of matter are independent. Each affects the others and they change together, in parallel.

Science is a belief system. The elementary assumption that forms the foundation for science is accepted by faith. When scientists find evidence that contradicts a theory, they are required to adjust it. When evidence contradicts their basic creed, they invent undetectable things to preserve their basic dogma. They claim that 84% of the matter in the universe is invisible. Why? Their laws of physics never work at galactic scales. They claim the vacuum of space time is stretching light, pushing galaxies, pulling more energy out of the vacuum to accelerate the stretching of the vacuum. They even imagine that stars accreted from space dust when we observe them emerging from the unformed matter in the

core of billions of ancient galaxies. We even observe local stars shooting out bidirectional jets to form huge dusty nebulae. Earth’s continents also fit together on a tiny globe without surface seas, which supports the biblical claim that the Earth spreads out in unbroken continuity. The picture of how the Earth continues to grow as new oceans form is from Michel Netzer which he released under the cc 3.0 license.

The laws of conservation are tautologies, restatements of the basic metaphysical assumption upon which Western science was contrived. Even their empirical measuring system depends on the notion that atoms are perpetual motion engines.

Ancient atomic clocks visibly clock tiny fractions of the frequencies emitted by modern atoms. Even local atomic clocks, when compared to their transponded reflections from hours ago, (Pioneer Anomaly) are observed to accelerate in the same manner and direction (dependent on distance) as the atomic clocks in billions of galaxies. The visible history of how trillions of star-streams accelerated out from tiny galactic cores trumps all the laws of physics.

When considering the validity of conservation, it is important to first examine the historical, metaphysical assumption upon which conservation ideas are based.

The picture is of ARP-188 from NASA/ESA Hubble legacy archive. Processing by  Bill Snyder, Heavens Mirror Observatory. All over the universe, telescopes reveal star-streams emerging from the core of countless galaxies at many ranges. Often the globs, packed with stars, are bluer than the core of the galaxy. Evidently they emerged from the core periodically, which is why they are often seen in equally spaced chains. In ARP-188, the emerging star streams have accelerated out from the core into a long stream of blue star globs. What we observe in billions of galaxies is irrefutable evidence for biblical creation. It also confirms that the properties of matter change relationally, throughout cosmic history.