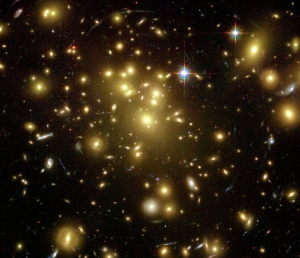 The Bible compares God’s olam (ancient) goings to the old (ad) mountains and the ancient (olam) hills (Habakkuk 3:6).  Jesus came at the completion of the plural eons (sunteleia aionon Hebrews 9:26). According to Hebrews 1:2, God fashioned the eons (aionas). The Greek for Hebrews 11:3 explains that the plural eons were passively equipped by God’s command from unseen things that became luminous. We observe, in countless galaxies at many ranges, how streams of stars emerged and spread out from point sources (things not seen). Without question galaxies are extremely ancient.

The Bible uses eon words (olam and aion) over 500 times. Yet it also counts about 4,000 years from Adam to Christ. These are not in conflict if Earth’s rotation and orbit (days and years) continue to accelerate together (Genesis 47:9) throughout history.

A proper understanding of earth-history demands valid assumptions. 2 Peter 3:3-5 predicts the first law (arche ktisis) of the last-day mockers. They will obfuscate the history of the heavens and earth because they hold to a first law (arche ktisis): “all things remain the same.” In Greek, without the definite article, panta houtos diamenei means all things that exist remain the same. Indeed, the definitions of physics, most measuring units, scientific methods and the mathematical laws of physics were built on the presumption that matter does not change itself as it ages.

A reasonably accurate earth history requires understanding the nature of matter and change.  The biblical creation account gives us some interesting clues. First God created (completed action verb) the heavens and the earth – the entire universe. What did the universe look like at this stage? The next verse starts with the Hebrew waw ( but, and) the earth was (completed verb) unformed and dark. How did the Earth receive form?

God’s wind dithered (Hebrew word for fluttered) in unbroken continuity above the Earth’s dark, primordial surface as God continued to command light to continue to be. Indeed, light never stops dithering around within matter to this day, giving it extension. Evidence? Colliding beams of light can change into “electrons.”  Colliding “particles” turn into light-like things. Matter’s dual nature and non local attributes show that matter and light are a complex intertwined relationship.

Romans 8:21 explains that the creation is enslaved to change. Paul used orderly submission and together verbs in this passage to describe this universal corruption. Things that change together in an orderly manner, change relationally. Relational changes cannot be precisely measured because every part of reality changes together. Yet relational changes are visible throughout cosmic history. With telescopes, we can see at many ranges (eras) to near the beginning of the universe. Ancient atomic clocks visibly ticked at less than 10% of the frequencies of modern atoms.

The Bible describes how, beginning on day four, God continues (imperfect verb) to form the Sun, Moon and stars and continues (imperfect verb) to make them into things that spread out (Hebrew  raqia). Raqia is a noun, the things that spreads out. The visible record of how billions of  galaxies spread out from point sources clearly shows that the properties of matter are emergent.

Can we observe local evidence for matter changing relationally? Earth’s continents fit together on a tiny globe without major surface seas. A global expansion seam runs through every ocean with the youngest crust adjacent to the volcanic crack and the oldest on the continents. Isaiah 42:5 explains that God stretches the Earth in unbroken continuity and that even what is born from Earth spreads out!

Do orbits continually spread out, as suggested in the Bible? The records left by the earliest civilizations tell of close passages and the shattering of a nearby planet. (The Hebrew Scriptures mention both, as though the solar system was much smaller). Evidence? Most asteroids have angular shapes and long, rocky cliffs as though they are broken planet pieces. Meteorites of granite, andosite, basalt and nickel-iron support a shattered planet, not the accretion of space dust. Cubanite found in some chondrite meteorites and from the comet Wild2, formed in warm liquid water. Evidently a large, watery planet was shattered, as the ancients and the Bible described.

Records from the 21 year reign of the Babylonian king Ammizaduga show that Venus was not in its modern orbit. Ptolemy, 1850 years ago, measured the diameters of planets – relative to the Sun. All his diameters are larger than what we see today. His Venus was 1/10th the size of the Sun – 3 minutes. Jeremiah Horrocks measured Venus’ diameter as 1.3 minutes, during the 1639 transit. Venus’ diameter was 58″ during the 2012 transit. In 1687 the distance to the Sun, calculated two different ways from Mars’ parallax, was 7% less than today’s value. The solar distance from a similar 2004 parallax measurement was 2 million kilometers greater than the 1960′s radar value of the AU. Have you ever wondered why Mars once had flowing rivers yet today its poles are covered with frozen CO2? Evidently the solar system has expanded over the centuries as the properties of matter continue to change relationally.

What could cause expanding orbits and how could this result in accelerating days and years? Gravity has an aberration! The Earth moves as the Sun’s gravity propagates at light speed, which causes the Sun to pull more on Earth’s leading hemisphere (dawn) than the trailing side (sunset). This gravitational imbalance spins up our rotation while gradually pushing our orbit outward. The effect of gravity aberration is to accelerates days and years together. Old people remember how much slower life was in their youth.

Evidence? Since the aberration of gravity increases with distance, the outer planets experience a greater outward push than the inner ones, which produces logarithmically spaced orbits in the solar system. Data from Kepler and terrestrial spectroscopes shows that planets around nearby stars also have logarithmically increasing spacings. Snail shells, planet spacings, spiral galaxy arms and bank balances grow logarithmically from continuing, incremental changes.

More evidence! Paraconical pendulum vary their precession rates with the position of the Sun and Moon, relative to the instruments location on the rotating Earth. Ocean tides confirm that gravity from the Sun and Moon affect opposite sides of the Earth differently. Maurice Allais’s month-long experiments show the effects of solar eclipses on a pendulum’s precession rate.

Wait, shouts the scientist! We confirm that orbits precisely follow clocks and the predictions of Newton’s clock-based calculus. Answer: Ancient atomic clocks are observed to run slower than modern clocks everywhere in the universe.  We observe in visible cosmic history that atomic clocks and outward-moving star streams both accelerate together. the core of ancient galaxies shine with different frequencies than the emerging star streams.

Although we cannot see gravity, visible cosmic history suggests that gravity is what emerges from matter as it changes relationally. Even local atomic clocks accelerate, when compared to their reflections from hours ago  – the Pioneer Anomaly. Local atomic clocks evidently are accelerating in the same manner and direction as the atomic clocks in hundreds of billions of spreading out galaxies.

The first photo is from the Hubble telescope. It shows perhaps as many as 160,000 globular clusters crowded around a large elliptical in the center of the galaxy cluster Abell 1689. Each star glob contains hundreds of thousands of stars packed together.  Image Credit: NASA, ESA, L. Bradley (JHU), R. Bouwens (UCSC), H. Ford (JHU), and G. Illingworth (UCSC)

The Hubble telescope also revealed long blue streaks circling around the fuzzy elliptical in the center of Abell 1689. The blue streaks are made up of equally spaced small galaxies in a chain, like the ones on the left. Some small cluster galaxies have a blue tail emerging from a redder core, like the tadpole on the top right.

In the Hebrew creation account, He continues to form the stars and continues to spread them out. In unbroken continuity he continues to call the stars to come out, yet no star goes missing (Isaiah 40:26). At many ranges, we observe how the star-globs spread out, accelerate out, as the stars increased in volume and their clock frequencies also accelerate. Cosmic history shows at many ranges, how galaxies grew into huge, local, growth spirals. We even observe bursts of intense gamma light (GRBs) arriving from the creation era. Perhaps this is God energizing matter by continuing to command light to continue to be.

Scientists cannot accept visible cosmic history because their structured, mathematical, empiricist  thinking was historically built on a single assumption, that the essence of substance is changeless. For this reason they have invented a universe that (they assert) is 99% invisible. For example, they may claim that galaxy clusters contain twenty times as much invisible matter as the natural, visible kind. They even imagine that the invisible matter is magnifying and distorting what we see.

Only the literal account of creation is confirmed in visible cosmic history. How could billions of galaxies form in only 6,000 years? Please look at cosmic history. The atomic clocks accelerate along with the outward accelerating stars streams. What could cause this? The properties of matter are emergent. Look!