Astronomers observe that edge-on spirals are slightly bluer on one side than the other. They assume that the redder edge is moving away and the bluer edge is moving towards us. Observing a color difference is not the same as observing the galaxy actually rotating. 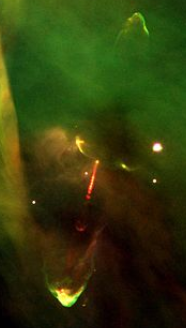 This photograph of HH34 is from the European Southern Observatory (ESO) . It is released under the Creative Commons Attribution 4.0 International License. Link to original photo:

Please notice the double bow shocks and a reddish column of dust emerging from the central star.

It is better to observe cosmic history than to speculate with mathematics. At the head of this article you will find a series of primordial galaxies arranged in a film strip. Right click on the image and select open link in new tab.  Each galaxy contains an emerging jet that has a different color than the galactic core.

Frame 1 shows HUDF 4801 with a red pulsed jet emerging straight out from the core. The light from this ancient galaxy shines at 42% of the light frequencies of modern matter.

Frame 2 shows HUDF 5658 with two blue globs emerging from opposite ends of an elongated core. The light from this galaxy shines at 48% of the frequencies emitted by modern atoms.

Frame 3 shows HUDF 5694 with a red core surrounded by blue globs. The small galaxy with the blue ends seems to be the beginning stage of a spiral. It shines at 48% of the frequencies emitted by local atoms.

Frame 4 shows HUDF 6009 with a red core with a blue, pulsed  jet to the left. This galaxy shines at 1.8 times the wavelengths emitted by modern atoms, which is about 55% of the frequencies emitted b modern atoms.

Frame 5 shows HUDF 4491 with a red core and a knotted blue jet. The light from this ancient galaxy shines at 48% of the light frequencies emitted by modern atoms.

What we observe only fits the Hebrew creation account. God created (completed action) the plural heavens and the Earth first. Then Elohim’s wind dithered over the dark and formless Earth as He continued to command light to continue to be. Indeed, light dithering around within matter gives it extension. Half way through the creation week, He began to form the Sun, Moon and stars and continued to make them into spreading things (Hebrew noun raqia). He continues in unbroken continuity to call the stars to come out, yet none go missing (Isaiah 40:26).

Visible galactic history defeats mere mathematical speculations. What is wrong with mathematics? Scientific definitions, measuring units, mathematical laws and cosmologies depend on an assumption, that matter does not change itself relationally as it ages. Visibly, we observe how the properties of matter keep changing as star globs emerge from formless matter at the core of galaxies. We observe how the light clocks accelerate along with the accelerating star streams that follow each other outwards in lanes in violation of every definition and law of physics.

The photos of early spirals from NASA’s Hubble Ultra Deep Field are in the public domain.