A principle is a fundamental rule of conduct or thought. Paul says I find the principle that evil is present with me (Romans 7:21). The Greek word translated “principle” is nomos (law). Indeed, principles are often law-like.

Biblical principles are statements about the nature of things. The picture of the growing earth is from Michael Netzer. It is licensed under the Creative Commons Attribution-Share Alike 3.0 Unported license. An important biblical principle is that the universe is enslave to change. An Earth that changes size, is evidence for this grammatical, biblical principle.

Another biblical principle relates to the laws of the universe. Job 38:33 “Do you know the ordinances of the heavens, Or fix their rule over the earth?” The universe follows laws (or principles) that function both here and in the distant heavens. God does not expect man to unravel his laws. Proverbs 2:6-7 “For the LORD gives wisdom; From His mouth come knowledge and understanding. He stores up sound wisdom for the upright.” The Hebrew word for stores up means to hide by covering over. He hides understanding, preserving it for the upright. Proverbs 25:2: “It is the glory of God to conceal a matter.” Solomon wrote, “I set my mind to seek and explore by wisdom concerning all that has been done under heaven. It is a grievous task which God has given to the sons of men to be afflicted with” (Ecclesiastes 1:13).  Solomon wrote of the impossibility of a valid science in Ecclesiastes 8:17. “I saw every work of God, I concluded that man cannot discover the work which has been done under the sun. Even though man should seek laboriously, he will not discover; and though the wise man should say, ‘I know,’ he cannot discover.”

Changing Earth Creationists don’t just say, “human knowledge is fallible” or “our knowledge of nature is limited.” We use a biblical principle that explains why. Paul, in Romans 8:19 – 22, explained that the creation was subjected to inutility because it is enslaved to change (Greek phthora). The Greek philosophers used this word for ongoing, fundamental change. Paul used two orderly submission verbs and two together verbs to explain the creation’s degeneration. Things that change in an orderly, together way – change relationally. Relational change is when no aspect of reality is unaffected by the change because  everything is changing in parallel, together.

The evidence for relational changes in matter is visible in the only history that we observe as it happened: galactic history. The earliest galaxies were often naked, without starry appendages. Some of them shone at less than 10% of the frequencies emitted by modern atoms. How could this be? When God first created the universe (the heavens and the Earth) the Earth was unformed and dark. Then God’s wind dithered in unbroken continuity above the dark primordial place (tehom) as He continued to command light to continue to be. Indeed, light dithers around within all substances, evidently giving them extension.  Matter is a relation with light, not just particles, which is why it has non-local and quantum properties.

We can observe the history of the universe at many ranges, with telescopes.  Early galaxies often were often surrounded by strings of tiny globs packed with stars. We observe how the stars continued to emerge from the core, rotate out, spread out, often growing into huge, local, growth spirals. He continued to form the Sun, Moon and stars and continued to make them into things that spread out (raqia) on day four. He continues, in unbroken continuity, to call the stars to come out, yet none go missing (Isaiah 40:22 and Isaiah 40:26). 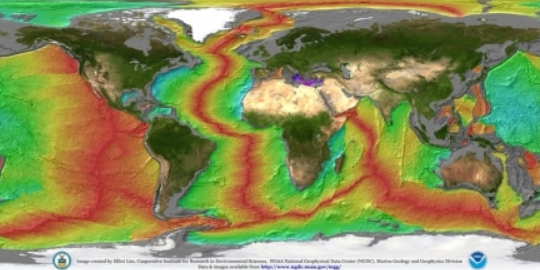 The name Changing Earth Creation refers to understanding creation as the ancients would by accepting the visible evidence that everything changes.  For example, according to the Bible, the Earth spreads out in unbroken continuity and this happens above the waters (Psalm 136:6). Indeed, a global expansion seam runs through every ocean. We know it is a spreading seam because  new seafloor emerges as molten lava to harden as fresh basaltic crust. The continents only fit together on a tiny globe. The seafloor is younger than the continents. The youngest seafloor is adjacent to the expansion seam. The continents are covered with layers of crushed sedimentary rock but the abyssal plains are covered with marine oozes., the thinnest layers adjacent to the expansion seam and the thickest near the continental margins.  The layered sediments in the subduction zones show that the theory of subduction is a scientific myth, invented to protect their fundamental creed. (Image Source for the relativwe ages of the seafloor is from: Elliot Lim, CIRES & NOAA/NGDC)

The fundamental principle that everything is changing in an orderly together (relational) manner is essential for understanding Earth and cosmic history. Changing Earth Creationists interpret the Bible with the ancient world view, that everything changes. We confirm this with the local growing Earth and the distant galaxies. The galaxies grew out from matter that originally had no form. The stars spread outwards, increasing in volume as matter’s atomic clock frequencies also accelerated.