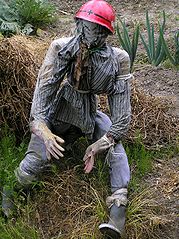 Armies often use training dummies stuffed with straw. A raw recruit easily trusts his bayonet into the straw man because it cannot fight back. The “straw man fallacy” is an intentional (or unwitting) misrepresentation. A debater attacks the straw man and claims victory over the misrepresented matter, rather than the actual issue.

Arguments that use the age of the universe to refute creation are thrusting at straw. The Bible never says the Earth is young. It repeatedly calls the Old Testament era the eons, while today we live at the terminus of the eons. What does the Bible mean by eons? Job, who lived during the dinosaur age, listed a number of geological events that passed during the few days of his life. One of his geological markers was the sea (Hebrew west) dried. Drill cores show that the Mediterranean dried repeatedly leaving rock salt, gypsum and stromolite sandwiched between layers of deep sea oozes. The deep sea oozes are made up of plankton skeletons that once lived near the surface of the mediterranea. As they died, their alcuim carbonite shells drifted to the ocean fkiir and built up deep layers of oceanic oozes.

After they died, their calcium carbonate shells fell to the ocean bottom and formed thick layers. Periodically the Mediterranean  refilled through the straights of Gibraltar carrying along clay sediments.

Job 14  also uses the washing away of the dust of the Earth and the way water wears away rock as a marker for the brevity of life during his days. Job live East of the Jordan river, during the dinosaur era. Not far from his home, the Nile river cut a channel 1200 kilometer long as it rushed down to the Mediterranean  that was thousands of meters lower than its modern level. The Nile canyon at modern Cairo was 2500 meters deep, but has now silted up to the level of the modern sea.

Job 14 also mentions how their faces changed (doubled) before they died. If we lived long enough to observe the Mediterranean dry, our faces would grow huge brain buckets and thick Neanderthal brows. However, our grandchildren would have skulls like moderns, as the Neanderthal child fossils show. The ancient poets admitted that the first generations lived in the golden era and durations continue to decrease until, as Hesiod anticipated, children will be born with grey temples.

The speculation that time exists and is linear gradually developed in western Europe over the last 1600 years. No one in the Old Testament era could speculate about time because it was not invented in Europe until much later. Attacking the Bible using western time notions, instead of interpreting it the way a contemporary would understand it, is a straw man attack.

God’s Word is powerful. It vanquishes the foe because it is alive, not like a straw man. “‘The prophet who has a dream may relate his dream, but let him who has My word speak My word in truth. What does straw have in common with grain?’ declares the LORD. ‘Is not My word like fire?’ declares the LORD, ‘and like a hammer which shatters a rock?” (Jeremiah 23:28-29)

“For though we walk in the flesh, we do not war according to the flesh, for the weapons of our warfare are not of the flesh, but divinely powerful for the destruction of fortresses. We are destroying speculations and every lofty thing raised up against the knowledge of God, and we are taking every thought captive to the obedience of Christ, and we are ready to punish all disobedience, whenever your obedience is complete.” (2 Corinthians 10:3-6) When our obedience is complete, we will use God’s word to bring down the great fortresses of speculative reasoning raised up against the knowledge of God. Does this mean western science? Western science was historically built on the very idea the Bible predicted for the last days – the notion that all things remain the same. He commands us to watch out for the elementary assumptions of the world and philosophy that can take us captive (Colossians 2:8).

The creation is visible as it happened long ago in the distant heavens. What we observe exactly fits the literal text. Visible cosmic history does not fit science or scientific tailoring of the creation text. If you have never read a literal, rather than a traditional exegesis of the creation account, read the seven days of creation under the menu “Creation Days” on this web site.  The literal text is powerful, but the traditional exegesis of creation (that adjusts teh text to fit science) robs it of its power. The picture of a straw man is from wikipedia – under a Creative Commons Attribution-Share Alike 3.0 Unported license.