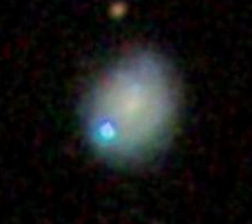 Astronomer Michael Koss searches for active galactic nuclei (AGN) that have a bright emission spectra, like quasars. Astronomers deduce that AGNs are about five times the diameter of the solar system because they can change from one day to the next. They are so bright that no local mechanism (such as nuclear fusion) is known to produce such energetic phenomena. They sometimes have diametrical bright spots around them, as though they are in the process of ejecting, pulsed jets.

Michael Koss found a single bright spot (SDSS1133) whose brightness and spectra was that of an AGN , but it was not in the center of its host galaxy: the dwarf galaxy Markarian 177. The above photo of Markarian 177 is from the Sloan Digital Sky Survey and shows the 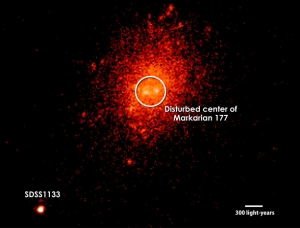 off center bright spot. Perhaps it is an exploding star! However, Koss found images of the bright spot taken 60 years ago. The AGN  has also brightened in visible light over the last six months. Neither of these suggests a star eruption. Koss theorized that the AGN is being ejected from the core of the galaxy. The picture of Markarian 177, (taken in near infrared that can see through dust) shows SDSS1133 in the lower left. Credit: W. M. Keck Observatory/M. Koss (ETH Zurich).

Whenever astronomers detect extremely energetic events, such as knotted jets emerging from a galaxy, they imagine that a black hole must be the source of the power. In the case of Markarian 177, perhaps two galaxies merged, each with its own black hole. As the two galaxies allegedly merged, the small hole was ejected. Koss plans follow-up observations in 2015 with the Hubble telescope. He thinks this may show that SDSS1133 is an ejected AGN.

We do not need stories about invisible black holes to buttress the Genesis account. With telescopes, we observe how the galaxies formed and it follows the grammatical text of the Bible.

According to the Hebrew text, God first created (completed action verb) the entire universe, the heavens and the Earth. However, at that stage, the Earth was unformed and dark. The text mentions God’s wind (spirit) dithering in unbroken continuity above the dark primordial Earth and that He continued to command light to continue to be. Indeed, light never stops dithering around within all matter, giving it extension, to this very day. Evidently He gave form to matter by continuing to command light to dither around within matter.

The Sun, Moon and stars did not begin to shine until the fourth evening and morning as God continued to command lights in the heavens to form into things that spread out (Hebrew noun raqia).  (All the verbs for day four refer to continuing actions, not one-time commands). We observe how the stars emerged from point sources as billions of galaxies (at many ranges) visibly grew out from things not see, evidently the unformed matter God created first (Hebrews 11:3). We observe strings of dense star globs in equally spaced chains surrounding the compact cores of many early galaxies. At many ranges, in innumerable examples, we observe that the stings of star globs continued to come out, taking up more volume, spreading out as the atomic clocks also accelerate.

Why do the cores of early galaxies and quasars shine so brightly? God energizes matter with light, so that the stars continue to form and become things that spread (raqia). Every day extremely bright flashes of gamma light arrive from the early universe. Perhaps this is God commanding light to continue to be, thus energizing and giving form to the formless things He created first. At many ranges, we observe how the stars came out and spread out, often growing into huge, local growth spirals. SSDS113 is just one of trillions of compact objects that are emerging and spreading out from the point source. Even in our own galaxy we observe stars shooting out jets of dust as they form huge, dusty nebulae. We even find a river of hydrogen linking the ore of the Milky Way with the dwarf companions Magellanic galaxies. Evidently they were ejected like the countless dwarf galaxies grouped around large ellipticals in hundreds of galaxy clusters.

What are quasars, BL Lacs, AGNs, midget Markarians and Seyfert  galaxies? They are small galaxies that emerged and spread out from the formless things God created first. What causes matter to continue to take up more volume? God continues to command light to continue to be.

How can we verify that this is so? The Hebrew grammar for Zechariah 12:1 explains that God continues in unbroken continuity to lay the foundations of the Earth. Indeed, the Bible states three times that the Earth spreads out in unbroken continuity. The continents fit together on a minuscule globe, without major surface seas. Perhaps the reason it did not rain during the garden phase was that their was only one, global continent in that era. Evidently the seas had all seeped underground on day three. Later the underground seas (Hebrew tehom) collapsed. After this the surface oceans began to form. Psalm 104:6-8.  The graphic of the growing Earth is from Michael Netzer who permits publication with attribution.