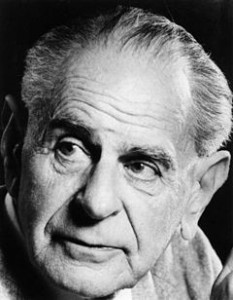 According to Karl Popper, scientists can only approach truth when they falsify their theories. Positive confirmations of a theory are suspect since they are “theory laden” since the apparatus of the theory is circularly required by the explanation.  Scientific tests are based on a theoretical frame work that is not itself subject to tests. In Popper’s view, as more and more theories fail, perhaps those that survive become less bad. The picture of Karl Popper is in the public domain, from Wikipedia.

Children do not learn Popper’s version of science. They learn that precision measuring, mathematics and logic reveal the truth.

Children do not study Thomas Kuhn’s history of science. Kuhn

claimed scientists are highly trained practitioners of a “normal science” paradigm. Their paradigm (theoretical model)  informs scientists what is a problem, how to define evidence, how to gather evidence and how to solve problems using the assumptions and techniques supplied by the paradigm. Scientists are unable to consider novel ideas that conflict with their paradigm. Occasionally an outsider revolutionizes science by questioning the accepted paradigm. When this happens, younger scientists may switch to the new paradigm as the older ones die off clinging to the old system. The new science advances until the next scientific revolution upsets the system again. The drawing of Thomas Kuhn is by the author.

Both Popper and Kuhn have historical support. History shows that scientists shore up their theories with auxiliary hypotheses, buttressed by unfalsifiable ideas, to explain away contradictions. The clay tablets from the astronomical priests of Bel Marduk record their mathematical procedures for calculating the ephemeris of a planet god. One Babylonian tablet records the purpose for their mathematical science. “The signs on earth just as those in heaven give us signals. Sky and earth both produce portents; though appearing separately, they are not separate. Sky and earth are related.” The planetary omens were not falsified when they failed to materialize because the priest could always claim the god was placated by a sacrifice.

Scientists also have faith, which they are trained to reason with. Their faith is never explicitly discussed or questioned. They learn it implicitly, by measuring and practicing textbook problems.

The faith of scientists is historical and is even predicted in the Bible. In the last days, Peter warned, mockers will come claiming that “all things remain the same.” Peter predicted that they will reject the the evidence that the plural heavens are out-old (ek palai) because they think all things remain the same. Indeed, the definitions of physics, most measuring units, methods and mathematical laws are based on the faith that the properties of matter are fixed, not emerging relationally. If you are unaware of how physics got its first principle, read about it on this web site. 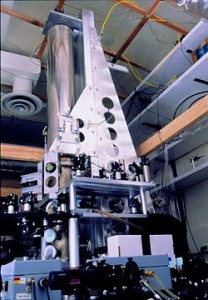 Let’s examine how empiricism works. By international agreements, the primary standard in science is the cesium atomic clock. By definition 9,192,631,770 microwave pulses from cesium 133 is defined as one second. The cesium clock is really two clocks. The input clock radiates the cesium with microwaves. If the cesium atoms absorb the microwave, they later relax and emit a narrow band of microwaves that are counted by the output clock. The output clock tunes the input clock for maximum emissions by means of a feedback circuit. If cesium atoms are changing themselves relationally, atomic clocks would continue to tune themselves to the continually changing atoms. The cesium second is an operational definition. It depends  on the assumption that atoms are perpetual motion engines.

Meter lengths, velocities, laws of physics, most empirical measuring units and mathematical constants depends on the assumption that atoms do not change themselves as they age.

Forty years ago, NASA sent two spin stabilized spaceships out of the solar system in opposite directions. NASA transmitted radio signals, derived from hydrogen maser atomic clocks, to the spin stabilized Pioneers. The spacecraft returned the signals using transponders. The returned signals, transmitted hours ago, kept slowing anomalously with increasing distance compared to NASA’s hydrogen maser clocks of the moment. The returned frequencies slowed (relative to distance) at the Hubble ratio that astronomers use to estimate the distance to ancient galaxies. None of the hundreds of billions of ancient galaxies clocks the frequencies of modern atoms and even modern atoms apparently are accelerating just like the atoms in billions of galaxies. The closest atoms usually tick the fastest.

Here is where scientists contrive unfalsifiable, auxiliary hypotheses to buttress their faith in atomic perpetual motion. They have invented a mathematical universe in which 84% of all matter is invisible. The invisible matter is needed because none of the laws of gravity work in galaxies. They imagine that more than 70% of the universe’s activity involves the spreading vacuum that pushes galaxies away while also stretching the frequencies of all passing light. They even speculate that a tiny bit of vacuum exploded and created everything out of nothing. Scientific cosmologies are the greatest system of mythology in history. All the myths were contrived to protect an assumption they never discuss or examine, that the intrinsic properties of matter are fixed, not changing relationally. They cannot question their fundamentalist creed because their structured empiricism and mathematical laws were founded on the sands of an untested idea, that the properties of matter are fixed, not emerging relationally.

The visible history of how galaxies grew from tiny naked globs to huge, local, dusty, growth spirals is the most powerful evidence against the first principle of science. Galaxies started out as naked cores of unformed matter. The stars emerged and spread out as the visible properties of matter kept on changing relationally. What we see in cosmic history fits the literal text of the creation account. He continues to form the Sun, Moon and stars and continues to make them into spreading things (Hebrew raqia). What is visible supports the biblical principle that the creation is enslaved to change that is orderly and acts together (Romans 8:19 – 22).

I predict that western scientists will never abandon their fundamentalist doctrine that the properties of matter are intrinsically  fixed, not changing relationally. How can scientific methods be tested? Ordinary people, not so thoroughly trained in the dogma, can lift up their eyes and look at galactic history. They will abandon the unfalsifiable myths about invisible things and simply believe their eyes. What glory the Creator will get when He proves that man cannot come to know Him through philosophy, only by the faith of a sinner who trust Him alone for salvation. The demise of western science will be one of His greatest victories. His glory is visible in the heavens. Look!

The picture of NIST-F1 is courtesy the National Institute of Standards and Technology (NIST).