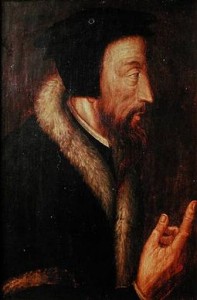 God actively brings judgments against the wicked so that they defeat themselves. “The nations have sunk down in the pit which they have made; In the net which they hid, their own foot has been caught. The LORD has made Himself known; He has executed judgment. In the work of his own hands the wicked is snared” (Psalms 9:15-16).  He is also continually rescuing and saving some. “Blessed be the Lord, who daily bears our burden, the God of our salvation.” (Psalm 68:19). He is also actively bringing about his predictions. Isaiah 46:11 I have spoken, I will (causally and repeatedly) bring to pass and continue to do what I have purposed (from Hebrew grammar). John Calvin followed Bishop Augustine and Friar Thomas by assuming God is outside of time and sees the future.  This painting of Calvin is from a sixteen century artist from the Library of Geneva.

Philosophers debate foreknowledge from openness to Augustinian-Calvinist positions. These debates start with philosophical notions about time. Substance-like time had not yet been invented when Moses wrote of creation. Moses’s grammar did not even include tensed verbs or a concept of an actual time.

When does God chose those whom He will save? Jesus, in John 6, explains that all the Father continually gives to me (continuing action active verb) will come to me (future active). No one can come to me unless the Father draws him (unless it has been granted to him by the Father) and I will raise him up on the last day. Romans 8:29-30 “For those whom He foreknew, He also predestined to become conformed to the image of His Son, so that He would be the firstborn among many brethren; and these whom He predestined, He also called; and these whom He called, He also justified; and these whom He justified, He also glorified .” Foreknowing, predestining and calling happens before the justifying and glorifying – yet all five verbs are active aorist (untensed – literally without horizons). The New Testament always uses aorist verbs (that do not specify when) to explain God’s choosing us. Ephesians 1:4 “just as He chose us in Him before the foundation of the world, that we would be holy and blameless before Him.” The verb for choosing us is aorist middle voice, unstated as to when. The middle voice suggests that God actively moves people to come to faith, yet they also responded. However, the plan for Christ was from the foundations of the world (1 Peter 1:20). The reader should carefully examine the many aorist verbs that leave open the question of when God makes the choice to save a specific individual. Paul wrote: God, who had set me apart even from my mother’s womb and called me through His grace, was pleased to reveal His Son in me so that I might preach Him among the Gentiles (Galatians 1:15-16). Although the aorist (timeless) verbs for setting apart, calling and revealing do not specify when God made the decision, yet the plan was fleshed out when Paul was in his mother’s womb.

Man is free to make choices, but our nature is such that we will never abandon our self righteousness and come to faith in Christ  apart from God’s specific calling.  (The wicked are enslaved to do Satan’s will and he blinds their minds). Yet Jesus says in John 6:37b, “the one who comes to Me I will certainly not cast out (again an active aorist – untensed verb).” I know a man who realized he was a sinner and deserved God’s judgment. He prayed a simple prayer. “If there is any way to get out of the judgment I deserve, please show me.” A few days later, someone came to him, gave him the gospel and he trusted Christ. God worked out the means whereby he came to hear the gospel and believe at a specific point. However, we do not know when God chose this specific man since the Greek verbs for God’s choosing are untensed. He does not have to see you before you were born to actively chose you with foreknowledge because he is actively implementing plans that He formed from the foundations of the Earth.

The number of those who will be saved and their names were written in a book from the foundation of the world. Doesn’t that mean that God saw the future? God could have written down the goal for how many He will save long before He actively chose individuals for salvation. He gives the elect new heavenly names in heaven. The man in the above example might have a name that would glorify God’s choice, such as: “please show me.”

Can His children (those who have true faith) affect God’s choices about whom He will save? Jesus told his disciples, “Truly I say to you, whatever you bind on earth shall have been bound in heaven; and whatever you loose on earth shall have been loosed in heaven. Again I say to you, that if two of you agree on earth about anything that they may ask, it shall be done for them by My Father who is in heaven” (Matthew 18:18-19). Ask God to save a specific person whom you are burdened for. Keep on believing and praying and watch God bring them to faith in Christ. Do not rely on your own ability to convince people with culture, philosophy, music, technology, rhetoric or science. God alone deserves the glory for bringing a sinner to faith in Christ.

He has declared the general outline of His plans and some of the specifics. He is actively working, bringing His plans to pass, even as He answers the prayers of His children.

Can demons and self willed people thwart God’s plans for history? They will fail because, with perfect judgments, God will defeat them even as he saves some who were under Satan’s dominion.