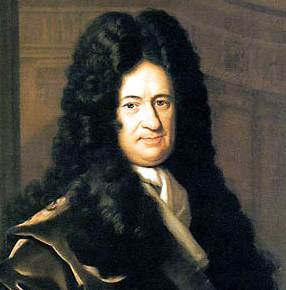 According to Isaac Newton, “Absolute, true, and mathematical time, of itself, and from its own nature, flows equably without relation to anything external, and by another name is called duration.” Today most people think like Newton – that space is fixed and clocks measure linear time.

The painting of Gottfried Wilhelm von Leibniz is in the Herzog Anton Ulrich-Museum, Braunschweig. It was painted about 1700.

Gottfried Wilhelm Leibniz’s disagreed with Newton. For Leibniz, space and time are NOT substance-like. Leibniz wrote to Newton’s friend Samuel Clarke, “without the things placed in it, one point of space does not absolutely differ in any respect whatsoever from another point of space.” How remarkably different this is from Einstein’s philosophy. Einstein imagined that space-time bends the geometry of a vacuum. Today’s  cosmologies speculate that ancient space-time stretched out the vacuum differently than modern (local) space-time. Both of these theories violate Leibniz’ claim that vacuums are devoid of properties. Leibniz saw time as the “order of successions” and space as the “order of co-existents.” Both men were mathematical geniuses, since they independently invented the calculus.

The Newton – Leibniz disagreements about “time” arise from their differing understandings of change. Newton operationally defined matter, time and space by measuring. Operational definition are not concerned with whether time or space actually exist. They presume that both sides of a scale are not changing themselves equally: that matter has fixed properties. Unlike Newton, Leibniz thought everything is made of monads: “the true atoms of nature . . . the true elements of things.” Monads supposedly are tiny indivisible things that are programed to internally, continually change. In a universe where matter is continually changing itself, time cannot be mathematically defined.

Time in the Bible is not a philosophical speculation. Biblical Hebrew did not have a simple word for time nor did it have tensed verbs. God continued to form the heavenly bodies (imperfect verbs) on the fourth creation day. The Sun, Moon and stars were to shine on Earth and serve as markers for days, season and years. Accordingly, the ancients used the cycles of the heavenly bodies, as markers for days, seasons and years. The Hebrew text indicates that God continues to make the Sun, Moon and stars into things that spread out  (Hebrew raqia). Orbits that spread out cannot be linear because they accelerate, relative to their previous cycles. The records from the ancients show that the earliest people lived for geological ages in few days (see Job 14). Over the centuries, astronomers measured (with angles) a decreasing solar parallax as though the entire solar system is gradually expanding. If you are looking for a causal reason whey days and years should accelerate (as per Genesis 47:9), consider gravity aberration, which you can read of on this web site.

What did He use to continually make the Sun, Moon and stars? First God completed the creation of the plural heavens and earth. However, the earth was dark and formless until Elohim continued to command light to continue to be. It was light that gave extension to the formless earth. Indeed, light dithers around within all substances, evidently giving them extension. Newton wrote, “Are not gross bodies and light convertible into one another, and may not bodies receive much of their activity from the particles of light which enter into their composition?… The changing of bodies into light, and light into bodies, is very conformable to the course of nature.” At the Stanford Linear Accelerator, colliding light beams produced electrons. When electrons and positrons meet, they convert to light. The Bible states that all that is visible (matter) is light (phos estin – Ephesians 5:13). In biblical physics, matter is a relation with light.

Apparently the Sun, Moon and stars were formed from the formless stuff (god particles) created on the first day. We confirm that this is the proper interpretation because we observe the creation era with telescopes. Billions of galaxies intrinsically grew from tiny, naked globs into huge, local, growth spirals. He calls the stars to come out, in unbroken continuity, yet none go missing – Isaiah 40:26.

A scientist might insist that orbits are clock-like and clocks are linear. We measure billions of years, claims the scientist. No! Your system of measuring is founded on the notion that atoms dither with perpetual motion. Yet we observe that ancient atomic clocks clocked tiny fractions of the frequencies of modern atoms. We also observe how the star streams accelerate outward, concurrently with the accelerating atomic clocks, as billions of galaxies grew into huge, local, growth spirals. What is visible is a violation of the creed of all scientists, that the essence of substance is changeless. This is certainly why they fill the universe up with magical things like invisible matter, vacuums that stretch themselves and accreting stars. The way galaxies grew from formless matter confirms a literal creation.

What is visible in cosmic history is anathema to a scientist, since their structured way of thinking, measuring and mathematicating follows Newton assumption that all things remain the same.

Lift up your eyes and observe cosmic history and you will see the evidence that the Bible will triumph over science. Even the calculus fails in a universe where there are no independent variables, where matter continues to change itself relationally.

The picture is from NASA’s Hubble Deep field and shows HUDF galaxy 4491. Notice the string of blueish star globs emerging from the redder core of this galaxy. The star streams accelerate along with the accelerating atomic clocks. This galaxy, on average, shines at 48% of the frequencies emitted by modern atoms.