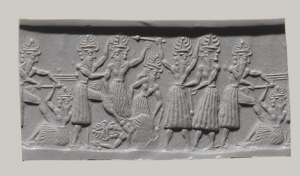 People in the Old Testament era could not imagine that time is substance-like because the concept of time seems to have been invented around 2600 years ago. The concept of time is very fundamental to the western world view. It was greatly augmented by Catholic philosophers who interpreted the Bible with their time ideas.

All early people believed in geological eons in few years. Job 14 lists the geological events that passed during the lives of Noah’s grandsons. One of Job’s life-duration markers was that the Mediterranean dried. Indeed drill cores show that the Mediterranean dried repeatedly. According to scientific estimates, the last drying was 5 million years ago. According to the Bible, Job lived during the dinosaur age, less than 5,000 years ago. Job also mentioned how their faces changed before they died. If we lived for eons, our skulls would grow Neanderthal features. Neanderthal children had skulls like moderns, which supports Job’s statement that their faces changed (doubled) before they died.

We can compare the shapes of countless galaxies at many ranges using telescopes. The fact that the universe is eons old is clearly visible in galactic history. Hebrew 11:3 By faith we are apprehending that the plural eons were passively equipped by the command of God as luminaries appeared from things unseen.

We observe that the earliest galaxies were often tiny and naked, sometimes surrounded by equally spaced globs with different spectral colors than the core. At many ranges we observe how the globs accelerate outward, taking up more space, changing their spectral frequencies as the stars accelerated out, often growing into local growth spirals. The star streams move outwards in the opposite direction from Newton or Einstein’s theories. Visibly, the plural eons passively formed from things not seen, as galaxies grew from point sources in their cores. Perhaps He formed the plural eons by decreeing that the properties of matter should continue to change (Romans 8:19-22) in an orderly relational (together) manner.

If what we see in the distance is real, then Earth’s orbit should also accelerate. Over the centuries, astronomers measured, with angles, a decreasing solar parallax. Thirty five hundred years ago, our ancestors mentioned close planet passages and the shattering of a nearby planet, which the Bible also records. The solar system contains tens of thousands broken planet pieces in the form of comets and asteroids. These contain some rocks whose crystals formed deep underground under volcanic conditions as well as sedimentary rocks, like cubanite. Cubanite forms in warm, liquid water. Evidently a planet was smashed just like our ancestors (and the Bible) mentioned a few thousand years ago.

A scientist might insist that they measure clock-like orbits, which prohibits planet collisions 4,000 years ago. In 1970 NASA sent precision radio signals (derived from hydrogen maser atomic clocks) to the distant Pioneer 10 & 11 spacecraft. The spacecraft returned the clock signals back to Earth by means of transponders. NASA’s clock signals, transmitted from the past, kept changing with distance, relative to the clocks-of-the-moment. NASA’s atomic clocks accelerated relative to the distance to the transponders and the Hubble ratio. Astronomers use the Hubble ratio to estimate the distance to galaxies using their observed light clock rates. Evidently atomic clocks from the past were running slower than modern clocks since some ancient light-clocks, shine at about 7% of the frequencies emitted by modern atoms.

Why should clocks and orbits both accelerate?

1. The Bible plainly states that the creation is enslaved to change. Paul used orderly submission and together verbs to describe this deterioration in Romans 8:19 – 22. We observe that atoms continue to change relationally by comparing the shape and spectra of galaxies at many ranges.

2. The gravitational phenomena is not a perpetual motion effect, as in Newton and Einstein. As atoms change their clock rates, they evidently emit gravity. Inertia and the gravitational phenomena were evidently different a few millennium ago, which is why giant dinosaurs once roamed the Earth. If they were alive today, they would have trouble standing due to modern gravity.

3. The gravitational phenomena does not propagate at infinite speed, as in Newton’s formulas. Gravitational aberration, the angular offset of the Sun’s gravity, pulls more on Earth’s dawn than its sunset. The aberration of gravity accelerates Earth’s orbit, gradually pushing our planet (and all the planets) outwards in their orbits. It concurrently accelerates the earth’s spin so that the ratio between days and years stays about the same.  The aberration of gravity also causes the distances between consecutive planets to increase logarithmically (the Titius Bode effect). It is not time that is accelerating, but rather orbits and rotations, relative to their previous states, not relative to clocks.

Someone might insist that there is a balance between the Earth’s inertia and the pull of the Sun’s gravity. If one of them were to change, the earth would be ejected from the solar system. Relational change is where everything changes in parallel, together. You cannot model relational changes with mathematics. Mathematical models are based on the notion that atoms are perpetual motion engines. The effects of relational changes are not conjecture, since they are visible. We observe how billions of galaxies intrinsically grew into local, growth spirals in violation of all the laws of physics.

Lift up your eyes and look at galactic history. How great will be the triumph of the Word of God over science.

The above photo is a roll out of a cylinder seal from Kish – from the Metropolitan Museum of Art. It depicts a common theme from 4,000 years ago, a battle between planet gods. We know they are planets because they are wearing hats with horns, perhaps depictions of ice rings or the crescent shapes when a planet is at an angle from the sun. Two planet gods are down and being brained with maces. One planet god has gripped the horned hat of another and has raised his mace. The Bible condemns the worshiping of planet gods, however, it uses similar words as the pagans to describe a planet shattering.